You Tell Us: Diagnosed Under 50 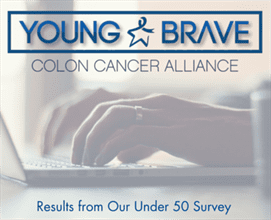 Thank you to everyone who took the time to complete our survey. Your input will give us a better understanding of your experiences and concerns, and we’ll also be able to raise greater awareness for young-onset colorectal cancer.

Check out some of the interesting takeaways from our Young and Brave survey:

We also asked about your biggest challenge as someone diagnosed under 50. Here’s what you told us:

No one seemed to take my symptoms seriously. I kept getting passed to different doctors, but I didn't give up. I finally decided on my own to see a GI specialist. Also another thing I struggled with was feelings alone; I felt like I didn't have anyone to talk to close to my age who was dealing with the disease... Well, until I discovered the Colon Cancer Alliance. One of my doctors eventually put me in contact with someone close to my age dealing with the same disease. It really helped to talk to someone who had been through it.

Being a parent and fear. I hate what it put my family through. I have a fear of its return and I want to see my girls grow up. Also hit me hard financially even with health insurance. Christmas had to go on a credit card. There is help based on income, but not income to debt ratio.

There is no one big challenge. It's accepting the fact that I live in a country that has some of the best healthcare in the world, yet my cancer was missed by so many doctors—even when directly telling some I think I may have cancer. I feel it was dismissed simply because my age. It was even missed on TWO CT scans. It's sad. The hard thing is knowing that my daughter may now grow up without a mother and coming to terms with that is very hard. The day to day challenges cancer has brought in my life. Knowing how many young people this disease affects, yet is still ignored by so many doctors who dismiss patients for their symptoms if they are young. It's unacceptable.

I was lucky, I was stage IIA and only had surgery. So for me, learning how to live with life after cancer. I got pregnant and had a baby after being declared NED and have no idea what is normal/not normal with my pregnancy or pains after delivery. I don't know what will happen after (hopefully) many more years of CT scans or things like that because people weren't commonly diagnosed at 29, so the research isn't there.

Being an ostomate. How to still be a business professional and wear an ostomy. Intimacy. Finding the new normal. Retraining your brain to think and think quickly, effectively, efficiently.

Don’t forget, the Colon Cancer Alliance serves as a source of information about colon health. If you have questions or are in need of support, please contact our free Helpline at (877) 422-2030.