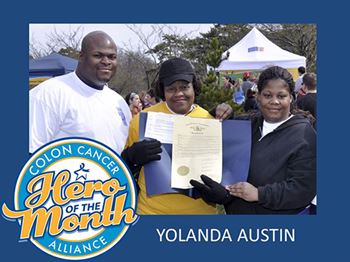 Yolanda Austin and Bonita Scott met at a St. Louis, Missouri church more than 30 years ago, and the two immediately hit it off. For 30 years, the duo remained best friends, and when Bonita was dealt a stage IV colon cancer diagnosis at just 41 years old, Yolanda stepped up, never missing a beat. Nearly four years later, Yolanda’s overwhelming and inspirational dedication to spreading awareness fills a void left by her best friend’s passing.

The Test & Treatment
In 2009, Bonita started experiencing abdominal pain. But, on the brink of having her first grandchild, put off going in for that colonoscopy until after the baby was born. In fact, it wasn’t until the baby was a few months old that she finally made the appointment. That’s when Bonita was dealt a stage IV colon cancer diagnosis.

Bonita started treatment in St. Louis but soon realized she wasn’t satisfied. Determined to have the best care possible in this fight for her life, she and her mom would make the 5 hour trek to Chicago, IL, where she worked with a team of doctors she trusted. Just a few months in, she was told her treatments weren’t helping – she ultimately decided to end treatment and return to St. Louis permanently.

The Light in the Darkness
As Bonita started to plan for her untimely death, Yolanda’s dedication and support continued to lighten her load. As her family struggled to accept that Bonita would be taken from them, Yolanda was there every step of the way, listening to and supporting her dear friend. It was during these four short months Bonita told Yolanda she wanted her to retire and focus her efforts on spreading the word across the country about early detection.

“I wasn’t even thinking about retiring!” Yolanda says. “But when Bonita died, I fulfilled her request. Now wherever I go, I talk to people about colon cancer and screening. It’s an obsession!”

Honoring Through Activism
From volunteering at the Undy 5000 for four consecutive years, to attending the 2012 Colon Cancer Alliance National Conference, to distributing information at health fairs and garnering local and state-level support for National Dress in Blue Day, Yolanda is all over the board (and the country) with her involvement.

“I went to the National Conference last year and I was really fired up because I knew colon cancer was reaching people under 50,” Yolanda says. “But to have people there addressing it and speaking about it, it really felt at home because it touched Bonita, who was only 41 when she was diagnosed.”

And during the last St. Louis Undy 5000, Yolanda even got connected with a local gastroenterologist, who’s now committed to attending some upcoming health fairs with her.

“The Undy 5000 is so powerful because you’re watching all of these people networking, sharing stories, coming together for the cause. It was just a total positive response from everyone I spoke with; the energy was just right there.”

A New Passion
“I feel like spreading awareness is now my calling.” Yolanda shares. “Bonita spoke it before she died and I see it coming together. She was an example of one who procrastinated and waited too long. That’s what I tell people now: take the time to get the colonoscopy. I may have had her a little longer if she would have listened and gone in and gotten checked.”