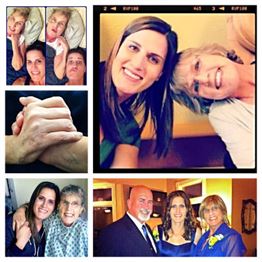 Rebecca Leroux lost her mother to colon cancer in December at just 56 years old. Since then, Rebecca has made it her mission to prevent others from going through what her family has, and she's using the Undy 5000 5K as her avenue to make a difference. For last weekend's Sacramento event, she rallied a team of 90+ people and raised more than $8,000 to benefit our lifesaving programs.

Can you tell us about your mom's cancer journey?

My mother, Linda Little, was diagnosed with colon cancer in 2008 and passed away on December 20, 2013 at the young age of 56. The doctors originally told her she had less than five years to live; a year later they reduced that to two years after a cantaloupe-sized tumor was found on her ovary. She was a fighter and lived for her family. She fought for five and a half years, until the cancer spread.

The last three months were a very hard journey. My husband and I sold our home and moved in with my parents to help as much as we possibly could. Even though my mother needed a lot of help getting around and doing everyday things, I loved those three months I spent with her. I will never regret selling our house in order to be with her. I have many excellent memories from this time we had together. I miss her very much.

Why have you become so involved & invested in spreading colon cancer awareness?

After my mom passed away, my husband suggested we start working on an Undy 5000 team. There were a lot of people who wanted to help after my mother passed but there was nothing anyone could really do. This was a tangible way for those people to help. My driving force has definitely been my mama and my desire to honor her.

How have you spread the word about the Undy 5000?

I’m thrilled to say I was able to rally a team of 90+ people by race day and we raised almost $8,000! I didn’t raise all of that money on my own – it took an army of friends and family to make it happen. We did everything we could to get the word out – announcing our team and efforts at church, spreading the word on Facebook, telling people at work and my family spread the word to their friends as well. Every time someone donated to #TeamLinda, I publicly thanked them and tagged them on my Facebook page.

As a token of gratitude, I decided I wanted to give everyone a Team Linda t-shirt who donated to the Colon Cancer Alliance under #TeamLinda or signed up to run with us. Originally I raised $1,100 to pay for the t-shirts through sponsorships from local businesses. We then raised more money through friends. My father, one of my sisters and I wound up funding some of the shirts by the end of it all. That’s OK though because giving people a shirt was an incentive to donate to the Colon Cancer Alliance – all to save lives.

What advice do you have for folks who are interested in fundraising?

I would say just go for it. If you don’t get much traction at first, don’t give up. Just remember you are doing it for your loved one and you are saving people from the heartache you are going through by doing what you’re doing. It’s worth it in the end no matter how little money you raise. It’s awesome.

This has been one of the most important, inspiring and proudest moments of my life. I can’t describe the joy that I have for being able to rally with my friends and family to do something so spectacular all in the name of my sweet mother who did not deserve to die. We all hate cancer and the best thing we can do to bring it down is raise funds and awareness to fight back.

What would you want people to know about the Undy 5000 event itself?

All I can say about the Undy 5000 is ‘WOW.’ I think the most fun thing about this entire process was seeing all of my friends and family all together. People flew in, drove in. There aren’t many times that we can all be together. Even though my mom wasn’t there physically to complete our family, she was with us in spirit and always will be.

The Team Linda picture of 90 people brings a smile to my face in a time when our loss is still so fresh. It’s been very difficult and being involved with the Undy 5000 has really helped the grieving process for me. Having the pictures and the memories from last weekend’s event will always be there. I can look back on those photos and smile and remember how many people support and love us and love my mother, forever.

Even friends and family who live abroad supported us by wearing their Team Linda shirts and running their own Undy 5000 where they were. It was very sweet.

Why should others get involved with the fight to take down this cancer?

Colon cancer doesn’t have to affect you the way that it affected my family. You can spread awareness and make sure people you know and love get checked early, when the chance of beating this cancer is much higher. My mother got checked at 51. Unfortunately she was diagnosed with stage IV terminal cancer at that moment. They suggest getting checked at 50, but if your insurance pays for it or you can finagle a colonoscopy before then, do it. I already had one (I'm 28) and so did my sisters. Some of us had pre-cancerous cells. Now we know early that we need to be checked often and be proactive about it.

I miss my mom so much and wish she were still with us. She fought a hard fight and wanted to live so badly. She loved her family dearly and we loved her with all of our hearts. I don’t want to see anyone else go through the journey my mom had to endure. If I can help just one person, it was all worth it.

To learn more about Team Linda or to donate, visit their team page.  And don't forget to check out the Team Linda Undy video Rebecca created!