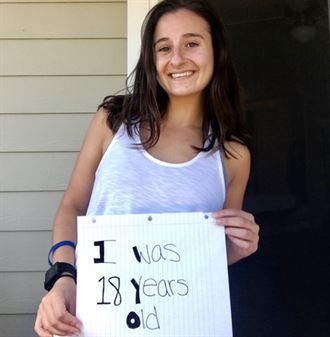 My name is Rebecca Stanton, I am 22 years old and I am in colon cancer survivor. It was mid June of 2012 when I was diagnosed. I was 18 years old, had just graduated high school and was preparing to start my first year of nursing school at the University of Maine. My symptoms began with extreme and unrelieved abdominal pain followed by vomiting and later, weight loss. I was scanned and found to have appendicitis. I had an uncomplicated resection and was sent home. It was a week or so later when I was called back into my physician's office and told I had a carcinoid tumor in my appendix with unclear margins pushing into my colon. At 18 years old, I had no idea what this could mean for me right now, a couple months from now, and years down the road. I learned that these tumors are rare, slow growing, particularly in someone my age, and that the only way the doctors would feel comfortable they removed the whole tumor was if they went in and removed half my colon. I learned that once these carcinoids become 2mm, they grow rapidly and spread rapidly (metastasis). I was told my carcinoid was 1.8mm. So, one hemi-colectomy, multiple lymph node biopsies, and multiple follow-up scans later- I was declared tumor free! What got me through that summer? My family and my Savior. My appendicitis was a blessing. I praise Jesus for inflaming my appendix so the doctors could go in and find my tumor before it grew just 0.2mm more. I am being called to use my experiences to bring hope and support to children and young adults struggling with a new or preexisting diagnosis of colon cancer. My advice for young fighters is to not be ashamed. It’s okay to be scared; it’s okay to worry about the outcome of your next scan or treatment. But don’t stop sharing your story. I chose not to be proactive about my follow-up appointments these last four years because I’ve been afraid of what I might be told. I swept my colon cancer history under the rug and lived like that summer never happened. But it’s time to stop being afraid, time to tell my story and use it to bring awareness to this disease. My goal is to reach out to those who need to hear my testimony and be uplifted and strengthened by hearing the testimonies of others. We are all fighters - now let's kick this disease in the butt!