Hero of the Month: Vicki Barrilleaux 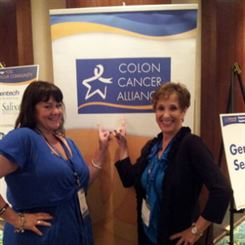 Immediately after kicking her own colon cancer’s butt, Vicki Barrilleaux was dealt another devastating blow when her only sister was diagnosed. Turning her own hardship into hope, she set out to educate those in her Texas community and beyond about the risks, symptoms and very real threat of this disease. Through her unyielding activism, especially during Colon Cancer Awareness Month, Vicki has single-handedly increased colon cancer screenings and awareness, saving friends and neighbors from the adversity she experienced.

Twelve years ago, when I was 47, I noticed rectal bleeding. I knew this was a symptom for colon cancer. I mentioned the bleeding to my OB/GYN at my well women checkup. After a digital rectal exam, I was told it was hemorrhoids, given a prescription and sent on my way. I remember leaving his office with a sense of relief. The bleeding was a nuisance, but something I could tolerate.

Soon the bleeding worsened and I was starting to experience pain. Time to bite the bullet and see my primary care doctor.  A scope was done and this time a mass was found. A biopsy confirmed that I had stage III rectal cancer.

By the time I finished my treatment a few months later, my brother and sister still had not been screened, so they became my concerted effort. But before I even had a chance to pester them, I received a call that my sister was hospitalized with unexplained vomiting.

I knew it was colon cancer and I knew it was bad. With a scope and biopsy, it was confirmed. It was inoperable and the prognosis was poor. Within 75 days my sister succumbed to this disease.

Suddenly my mission changed. I was an example of what can happen. I had a symptom, got diagnosed, was treated and survived. Whereas my sister was an example of what typically happens. She had no symptoms until the cancer was advanced. I knew I needed to tell her story because she was no longer able to and it would begin with her words to me shortly after her diagnosis: “That test was nothing; I should have been screened.”

Vicki joins with faculty, staff and students at Sam Houston State University on Dress in Blue Day 2013, sporting their blue![/caption]

I work at Sam Houston State University in Huntsville, TX. Since 2010 I have promoted Dress in Blue Day and March on campus, targeting faculty and staff by partnering with the Health Center, Wellness Department, Staff Council, student organizations and other departments in my division. I’ve also worked with our local hospital's Community Wellness Department, sharing my story and giving presentations for local service organizations and support groups.

After attending the Colon Cancer Alliance National Conference in 2012, I learned the troubling statistic that rates of diagnosis for younger people are increasing. Now it is my desire to broaden the scope of my presentations and reach students as well. I look forward to the day when the suggested screening age is lowered and more people chose to be screened for this preventable cancer.

What is your best advice for someone looking to get involved with March who hasn't been before?

Start small with an easy event and obtainable goal. From this point you can experience success and expand from there. And remember, having a passion about the subject makes speaking easier. Keep it simple, just tell your story. There is nothing like knowledge from experience.

Why is Colon Cancer Awareness Month so important?

Too often people are reluctant to speak about colon cancer. The tragic result is too many people being diagnosed too late, when the disease is more advanced and is more difficult to treat. Each of us impacted by this disease needs to talk!

What ultimately inspired you to get involved with March and spreading awareness?

I read during treatment that there is an obligation of the cured to give back. If I can tell my family's story to a group, encourage one person to be screened, I have accomplished my goal.

Are you interested in getting involved with National Dress in Blue Day or Colon Cancer Awareness Month? Help us take this cancer down! Learn more at www.dressinblueday.org and www.coloncancermonth.org.