Hero of the Month: Paul Weigel 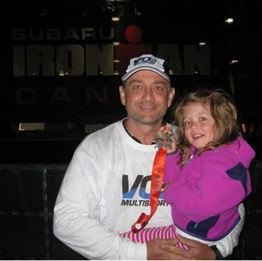 At 43 years old, Paul Weigel was a father, husband, marathoner and triathlete. The closest he’d come to being a patient was while having a hip replaced. After having GI issues dismissed by his doctor for several years, he was diagnosed with stage III colon cancer. But despite many rounds of chemo and radiation and debilitating side effects, Paul was determined to beat his cancer. And on July 27th, six months after his last round of chemo, he achieved one of the proudest accomplishments of his life.

Can you share a bit about your diagnosis & cancer journey?

My diagnosis, like many of those who suffer from colorectal cancer, was a complicated one. It took a series of events to determine I had it. I had some bleeding in my stool and gastrointestinal problems along with difficulty in going to the bathroom, and mentioned it to my primary care physician. He passed it off during two physicals over the course of several years.

I was very active before my cancer diagnosis, and ended up having to have hip surgery. That surgery turned out to be a blessing. My gut problems increased dramatically after surgery, and a little more than a month later, we found out that I had colorectal cancer. Doctors found a lemon-sized tumor in my colon, determined that I was 99% blocked, and decided I needed to start treatment immediately. I was lucky – in spite of finding the tumor, we determined I was only at stage III with the disease. It had spread to my lymph nodes, but not to my liver and kidneys. It’s likely that had I not had additional complications with my GI system following surgery, my tumor would have progressed to stage IV, and the likelihood of my survival would have decreased dramatically.

My cancer journey started immediately after diagnosis, with 28 rounds of radiation and chemotherapy, abdominal surgery, and then another six months of chemotherapy. I was sick enough during my initial treatment that I couldn’t be more than two minutes away from a bathroom. Even the thought of exercise put my body into shock.

What was your biggest challenge through this & how did you overcome it?

My biggest challenge was the cumulative effect of the ongoing treatment and its effect on me and my family. I had chemotherapy every two weeks, and some of the days/nights after treatment were incredibly wearing on us all. There were many days I’d come home from treatment and go straight to bed. Both my wife and daughter had to make changes to their lives to work around my illness.

How did fitness play a role in your recovery?

From the moment I was diagnosed, I determined that cancer was not going to beat me. Once I had my surgery to remove my tumor in July 2013, I increased my activity immediately, and took part in activities even while on chemotherapy. I was able to increase my walking more and more, and dreamed about participating in an Ironman triathlon someday. To be honest, I think that I was the only one who believed that I’d be able to do it. But having that dream was a driving factor in my health getting better and better. By focusing on my activities, I did everything I could to ignore the fact that I was a cancer patient.

What is your proudest moment?

From day one of being diagnosed I had a mantra – that if you dream in the impossible, the incredible can come true. My proudest moment came just last month, on July 27, as I finished Ironman Canada, a 2.4 mile swim, 112 mile bike ride, and 26.2 mile run, only six months after finishing chemotherapy.

What was your inspiration to keep fighting?

I found my inspiration to keep fighting in thinking about my little girl – and dreaming of sharing in different events in her life. I could close my eyes and imagine finishing a race with her now, her high school graduation and even her marriage someday.

What did you learn throughout this process?

I learned that being diagnosed with cancer is scary, but not a death sentence. Deep down, you can fight harder than you ever thought possible – though it’s not like you have any choice! There are deep, dark days, but also glimmers of hope to carry you through. You can count on your closest friends throughout the darkest of times.

What would you tell someone newly diagnosed?

Stuart Scott of ESPN said it great. "You beat cancer by how you live, why you live and the manner in which you live. So live! Fight like hell! And when you get too tired to fight, then lay down and rest and let some else fight for you."

What's next for Paul?

My fight has just begun. I was lucky this time to have been able to stare cancer in the eye and have cancer blink. Now I’m going to embrace my life even more than before. Who knows? There may be another Ironman or two in me. Right now, it’s important for cancer patients, survivors and their families to know that there is a life after cancer. A wonderful one.

Don’t forget, the Colon Cancer Alliance serves as a source of information about colon health. If you have questions or are in need of support, please contact our free Helpline at (877) 422-2030. We’re here to help!