Hero of the Month: Marty Andrews 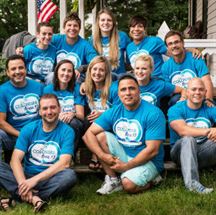 After experiencing symptoms for months and being ignored by his doctors, Marty Andrews took his health into his own hands. At 33 years old, he demanded his primary care physician send him to a specialist. His symptoms had gotten so bad that he met his GI’s recommendation of a colonoscopy with open arms. His screening resulted in an unexpected diagnosis: stage III rectal cancer. Marty has shared his cancer story in various ways over the years, becoming a Colon Cancer Alliance volunteer and most recently posing as a model for The Colon Club’s 2014 Colondar. In fact, his featured month just kicked off! Learn more about Marty and how his volunteerism has impacted his own journey.

How long have you been a Colon Cancer Alliance volunteer, and in what capacity?

Why is your volunteerism meaningful to you?

Being a Buddy makes everything I went through worthwhile. Sharing my story and providing hope and support to others is extremely rewarding. I am at a point in life where I do not think of being a cancer survivor every day. Telling my story reminds me to not take anything for granted and that each and every day is a gift.

Why did you want to be a model for the Colondar?

A friend of mine emailed me links to the Colon Cancer Alliance and The Colon Club after my diagnosis. Both organizations are extremely important to me and they hold a special place in my heart. The Colon Club taught me that I was not a freak being a 33-year-old diagnosed with stage III rectal cancer. As I continued to visit their website year after year and saw various Colondar models showing off their scars, for the first time I felt like I was not alone. I read each and every one of those young men and women's stories and realized they were just like me. They inspired me and gave me hope to fight! I promised

myself that if I could get through this cancer, I would apply to be a model. I made good on my promise and submitted my application to be a 2014 Colondar model. Little did I know I would actually be selected!

What did you get out of the experience?

I questioned what I had got myself into as it got closer and closer to the photo shoot. All I knew was I was flying to New York to model in a calendar. I just kept reminding myself it was for a good cause. The experience began like a reality TV show. I met the other models in the airport and we were whisked away in a limo. The connections were immediate and the bonds were strong. We talked, laughed and cried over those four days. We met as strangers and left as family. For the first time since my diagnosis, I felt complete. Since then I have met models from other years. We get together for a reunion yearly. It's like a new family to me. I am so grateful for the experience and I can never repay The Colon Club for what they gave me.

What is your proudest accomplishment as a volunteer & advocate in the colon cancer space?

You know, it's funny. When you hear you have cancer, the first thing you feel is the fear you are going to die. But so many good things have come out of this for me. The thing I am most proud of is being a survivor of a deadly disease that has taken too many lives and continues to do so. I am very proud to be a Colon Cancer Alliance Buddy, 2014 Colondar Model and have now even become a part of The Colon Club's Board of Directors.

If I had to nail down one particular experience I am most proud of, I would say it was a specific Buddy call. I talked to a man who said he was not going to fight this disease and he was not going to do treatment. He just wanted to live out his life. I told him I understood his feelings and had those same thoughts myself. I told him I wanted to quit chemo many times but I didn't.  I shared my journey in detail with him. A few weeks later the man called me and said, "Marty, I want to thank you and let you know I went to my first treatment today because of you." He brought me to tears. I was very proud of myself and him. It showed me how powerful my story could be and that it could give others hope to fight. And a little hope goes a long way during a cancer battle.