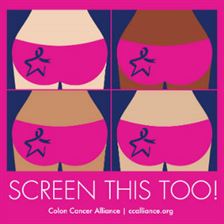 I thought I’d had cancer beat after I was diagnosed with lung cancer at 28 and had half a lung removed. The truth is, I had colon cancer symptoms, which I ignored, for 18 months. In hindsight, it was such a stupid thing to do. In fact, my gynecologist found blood during my annual exam and recommended I see a gastroenterologist, but I didn’t.

I wasn’t feeling sick so I convinced myself it was either hemorrhoids or some minor reason for the bleeding and never checked it out. Over the next six months, I began having bowel problems but chalked it up to stress. I started noticing some blood on the toilet paper but chose to ignore it. I just didn’t have the time.

Deena rocking both her blue and pink - Screen This Too![/caption]

In the six months prior to my diagnosis, I had such intense bowel problems that I had limited my diet to mashed potatoes and canned pears. CANNED PEARS! But hey, they seemed to wreak the least amount of internal havoc. Friends and colleagues expressed concern. One good friend asked me if I really thought it was normal to be eating mashed potatoes and pears. I knew it wasn’t.

Finally, after insistent pleading from friends, family and even other doctors, I agreed to see a gastroenterologist. Eighteen months after the gynecologist first found blood, I had my colonoscopy and was diagnosed with stage III colon cancer at 46 years old. Following my diagnosis, I had a bowel resection and a year of weekly chemotherapy with 5-FU and Levamisole. I’m happy to report my last colon cancer surgery was 13 years ago!

But in 2011, I was diagnosed with cancer for a third time – this time it was breast cancer. How could this happen? To help answer this question, my oncologist did genetic testing and found out I did not have the BRCA gene mutation, which would increase my risk for breast and ovarian cancers, but I was positive for human epidermal growth factor receptor 2 (HER2). This meant I had the HER2 protein in me, which promotes the growth of cancer cells. Because this was my third primary cancer, my doctor took a more extensive history and did additional genetic testing. He suspected it was caused from a gene mutation found in Ashkenazi Jews. I had the mutation which, he said, would predispose me to a number of cancers.

Through these challenging moments, I received incredible support from family and friends. I also participated in the My CCA Support Online Chats. I made a number of lifelong friends during those chats. I’m also a person who likes to be in charge and I knew from the get-go there was no way I was going to let cancer beat me.

I love that the Colon Cancer Alliance’s Screen This Too! campaign helps draw attention to colon cancer screening. It’s so important to increase awareness about this because both breast and colon cancers, if diagnosed and treated, can be beat. People need to know and realize that cancer is no longer a death sentence.

My advice: It is important to be informed about your options. Seek out information and remember that this is a beast that can be beat.