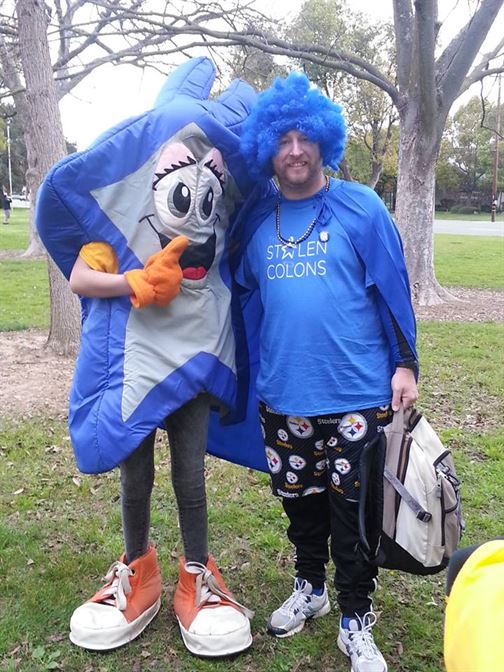 If you’ve been to the Sacramento Undy/Run Walk, you may have seen Captain Colon—a superhero decked out in a blue wig and cape spreading colon cancer awareness. The man behind the costume is Dominic DiFede, an Undy Team Captain who got involved after his brother passed away from colon cancer at a young age. We got a chance to talk to Dominic about his brother, the Undy Run and how you can help spread the world about this disease.

Where does your passion come from?

My main reason for becoming involved in spreading colon cancer awareness is because of my brother Robert, who we lost to colon cancer at the age of 42. I don’t know if it's because it was my brother battled this disease, or it's because my presence was his last request. Maybe it's because someone important to me passed away from a disease at a younger age than what the medical field says you should worry about it. Maybe it’s all of the above. I don’t know, but I do know I’m supposed to be doing this.

I once told my brother, “You are not doing this alone” and I still live by that.

How did you get involved with the Undy?

I was first introduced to the Undy when it was in its infancy while searching online for information about colon cancer. At that time, however, there were no races in my area. When the Undy came to Sacramento in 2012, I didn't find out until the day of the event and missed it. I registered and rallied a team once I found out it was coming back the following year.

What is your favorite part of the event?

There are t0o many things to mention! I enjoy everything about the Undy: from meeting new people and introducing someone to the event, to being part of this supportive community. But I think my favorite part is training to run the 5k. I’m not a runner, actually I hate it, but when I think about what my brother went through during his cancer battle, I am inspired to work harder and push myself to meet this goal for him.

What advice would you give someone starting a team for the first time?

You are in for some fun. As a team captain, you should learn as much as you can about the event (from the donations and how to register, all the way down to the FAQs) because people will look to you for help with their questions. Make sure you stay in communication with your team leading up to the event through things like group emails, texts or Facebook. If you show you are excited and will get your team excited too!

How have you rallied your community to get involved with the Undy over the years and what has this meant to you?

I have rallied my community to get involved over the past few years just by talking about the event in person or social media. I am generally uncomfortable asking for donations, even though it's for a good cause, but I am often surprised by people's willingness to help. Even my boss has given me donations from our store! And this year, my friend who owns a car detailing shop (House of Wax in Roseville--check it out!) is running a promotion in February and donating 20 percent of his sales to my team.

What keeps you coming back to the Undy?

This will be my fourth year participating in the Undy and I look forward to it every year. I think I have been the first registered participant each year and during the off-season I frequently check in with the Undy staff for updates. At this point, I feel very comfortable talking about colon cancer in any setting, but I understand that it is not as easy for everyone. Being able to have  an event that allows people to talk about this disease is so important.

Outside of the Undy, is there anything else you do to spread awareness about colon cancer?

Besides the Undy, I try to do what I can to support colon cancer awareness by being open and willing to talk about it. I participate in fun things like Dress in Blue Day and I have submitted pictures of myself and my black lab Maddux for the Get Blued Photo Contest. I continue to follow media sources from different colon cancer organizations. Just last March, I did "31 days of celebrities" where each day I posted e a picture of a celebrity who is a colon cancer survivor or angel on my Facebook page. This year I’m going to try something different for March, but you will have to stay tuned.

Supporting this cause has meant so much to me and I think it has helped me deal with the loss of my brother even though it’s been more than seven years. I just want to help create a louder voice for a disease that still doesn’t get the amount of attention it should like some other cancers. People often tell me I'm an inspiration for what I do, but I’m not at all. What does mean a lot to me personally though is when someone tells me that I've influenced them in someway because of my involvement with colon cancer—whether it be they decide to get screened themselves or they get a tattoo for a loved one. By being open about this disease, it allow others to open up. Communication is key to any awareness.