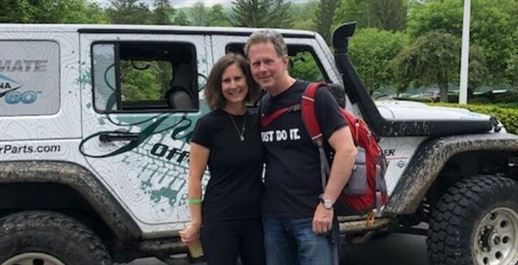 One afternoon in the 1960s, 8-year-old Mike Quinn’s parents were away at work and he was home alone. A stranger who wore a beard and carried something rang the doorbell. Mike answered. 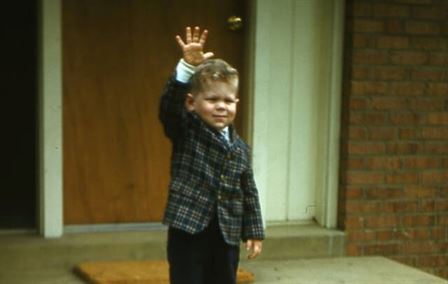 The gentleman greeted Mike and said he was raising awareness about a medical issue, and he asked to come inside.

In Mike’s living room, the man sat and placed an ostomy bag on the coffee table. Despite the man’s explanation and an appeal for donations to help people who use ostomy bags, Mike understood nothing about it.

“In the mind of an 8 year old, I had no idea what the bag was, but it seemed frightening at the time that someone would have to wear this on their side,” he said.

Though the bearded man left without a donation, he had certainly raised awareness on a subject that would come to indelibly mark Mike’s life about 40 years and 25 colonoscopies later.

In the late 1980s, Mike was seemingly healthy, newly married, and struggling—just a little bit—with some odd bathroom issues. A doctor, aware of the various gastrointestinal issues that can affect young people, ordered a colonoscopy.

Colonoscopy completed, the doctor looked at Mike and then to his wife. “You are married to a very sick man,” he said.

At 29 years old, Mike was diagnosed with ulcerative colitis, a chronic disease of the large intestine. In ulcerative colitis, the colon experiences inflammation and develops sores. Symptoms can mirror colorectal cancer and include loose and urgent bowel movements, bloody stool, and abdominal pain.

With the encouragement of his wife and desire to be healthy, Mike dutifully fulfilled that obligation about every year, sometimes every year-and-a-half, for 25 years. Just once, 15 years ago, doctors found a polyp—an abnormal tissue growth that can develop into cancer—which was removed using a looped cutting device.

Over time, the frequent colonoscopies troubled Mike less. The preparation had gotten better and he’d usually lose a little weight during the pre-scope fast, a benefit, he said.

“The other thing is, if I don’t do this, then I’m going to ask questions in my mind … Am I healthy? Is there something there?” Mike added. “I’d rather deal with temporary discomfort of the colonoscopy than live with uncertainty and fear.”

Then Mike had his last screening colonoscopy.

Having suffered ulcerative colitis for so long, Mike had become friendly with his doctors, including Dr. Gary Roggin. It was Dr. Roggin, in November 2017, who had to deliver disheartening colonoscopy results. 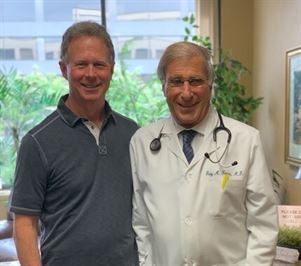 “He walked into the room,” Mike, then 58 years old, recalled, “and I thought, this is not good. The doctor said, ‘Mike, we found something, a very small rectal tumor.’”

The disease was stage I, the first and least deadly stage of the disease. Colorectal cancer caught at this stage is 90% curable.

“Because they caught it so early and it was so small, I did not have to have chemotherapy or radiation—and that’s a big deal,” Mike said. “I’m thinking, Awesome, get a little shredder in there, scoop it out, and I’m good to go—not the case.”

Based on the tumor’s location and Mike’s history of colitis, doctors told Mike “it all had to go.” Keeping any part of the large intestine, rectum, or anus involved too high of a medical risk for long-term health. Mike required a total proctocolectomy with an ileostomy or J-pouch.

That bearded man from Mike’s childhood, he really had something important to say.

Now faced with life-changing circumstances, Mike, who was trained as a scientist but made his living in sales, fell vexed with questions. Would he pursue surgery for a j-pouch or an ileostomy?

“Sometimes, as a salesperson, one thing I have to do—besides listen well to understand people’s issues and translate those into action—is to make a decision and get on with it,” Mike said. “You’re always under a tight time frame. But for a lot of scientists, questions aren’t answered quickly. For researchers who spend a decade or more on something, a year can be a very short time. For me, educated as a geologist,  a short time was a couple million years!”

Eventually, Mike and his wife discussed the options and determined he’d pursue a total ileostomy.

“Part of the reason I picked the external appliance or pouch, as the experts call it, was because it was one surgery,” Mike said. “Also, the pouch provides a higher degree of predictability.”

Today, Mike is healthy. He is fully engaged in his passions of music, being outdoors on a mountain bike, and spending time with his family at the lake in Minnesota. The guidance and encouragement from his ostomy nurse and the life changing support of his StealthBelt have given him the freedom that he felt he might never regain. 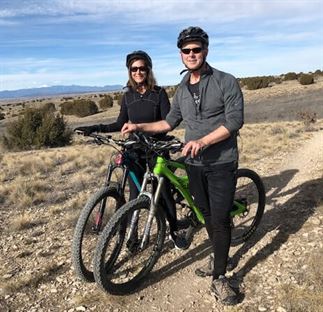 The second story, Mike’s other bookend, happened just the other day.

Mike had a business meeting at the Pentagon. To get inside, visitors are required to go through an airport-like body scanner. Due to his ileostomy bag—which can look suspicious on a monitor—Mike was taken to a separate room for a pat down.

A security guard asked how Mike got the bag. Mike told him, and then the security guard, who told Mike he was a 61 year old and a veteran, said he sometimes finds blood in his stool.

“You tell them you talked to a cancer survivor, and you have to get a colonoscopy,” Mike told the guard. “Screening saves people’s lives.”

Still, many eligible people in the United States go without being screened for colorectal cancer. In 2015, only 63 percent of people above age 50 had been screened, according to the National Health Interview Survey. Screening rates are lowest among the uninsured.

With the generous support of Boston Scientific, the Colorectal Cancer Alliance’s Blue Hope Prevention Awards Program reduces barriers to colorectal cancer screening for those most in need of a screening.

Allies can visit the Colorectal Cancer Alliance's website here for more information on financial assistance and screening, as well as find patient and family support.