Kathleen Fitzmaurice: No holding back 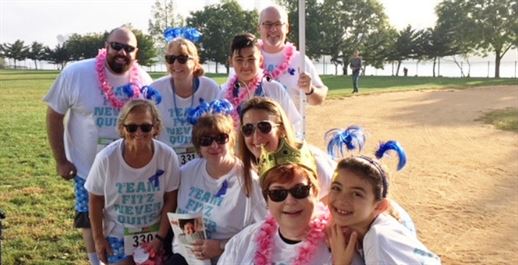 Determination and strength are more than words for Kathleen Fitzmaurice, 54. They’re a way of life. Low hemoglobin levels found during a regular physical led to an unexpected stage IV colorectal cancer diagnosis for Fitzmaurice. She is removing the stigma around colorectal cancer by opening up about her diagnosis and raising awareness with her “Team Fitz Never Quits” at the New York City Undy RunWalk on September 22.

“I was never going to be one of those people to speak in hushed tones,” Fitzmaurice said. “Cancer gets no respect, no reverence from us. It gets warning. It gets notice. It’s time is limited, and our plan of action is we fight.”

There were several possibilities for Fitzmaurice’s low hemoglobin levels, such as a potential severe ulcer. She was referred to a gastroenterologist to identify the cause. The doctor tried to complete a colonoscopy, but a large, inoperable tumor blocked the colonoscopy and shocked the Fitzmaurice family.

“The cancer couldn’t have been more unexpected,” she said.

After aggressive chemotherapy treatment, the tumor shrunk and caused a bowel obstruction, and doctors had to remove it.

Fitzmaurice said she has an amazing support system of family and friends. Last year, her sister-in-law, Lisa Fitzmaurice, discovered the New York City Undy RunWalk. She asked if she could start a team in Fitzmaurice’s name, and she happily agreed. Fitzmaurice was unable to run, but she cheered her “Team Fitz Never Quits” and other participants from the sidelines. 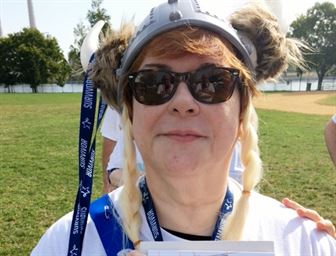 “I was surprised at how inspiring it was to meet survivors and talk to people who were 18 years or 10 years cancer-free,” Fitzmaurice said. “That was amazing to me because I didn’t think that was possible. I’m not cancer-free, but I’m working on it. Meeting survivors lets me know it’s possible.”

The New York City Undy RunWalk is one of 22 Undy RunWalk events across the United States organized by the Colorectal Cancer Alliance, whose mission is to end colorectal cancer within our lifetime by providing support services, raising awareness of preventive measures, and funding critical research.

At least 80 percent of those involved in the Undy RunWalk have some ties to colorectal cancer. While the event raises money to support the Colorectal Cancer Alliance’s mission, it’s also an opportunity to encourage those currently battling the disease, remember those lost too soon, and celebrate those who have completed colorectal cancer treatment.

In 2018 alone, more than 9,000 people in New York are expected to be diagnosed with colorectal cancer, and nearly 3,000 will die from this highly preventable and treatable disease.

“If you are newly diagnosed, the only thing I can say is give cancer no reverence,” Fitzmaurice said. “You have to fight. Never give up. Take a break if you need to, but fight never give up.”

Register for the New York City or other Undy RunWalk across the country here.