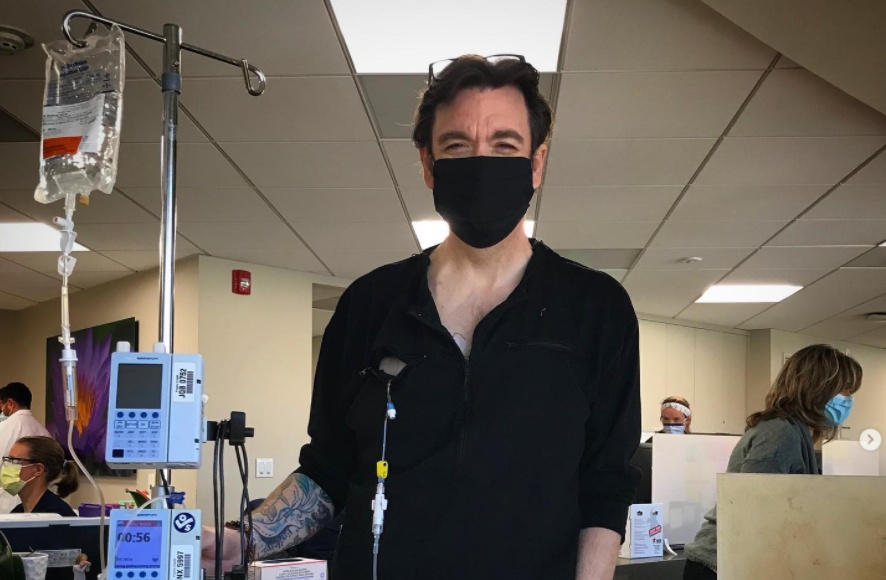 In December of 2020, I was diagnosed with stage IIIb colorectal cancer at age 48. And if you ever wondered how hard it is to fly under the radar fighting cancer while going through a global pandemic, the answer is “a lot easier than you think.” Especially as a hermit screenwriter and filmmaker working during quarantine.

It all uncomfortably-but-quietly started around August 2020. I had finally gotten a standing desk and was so excited to begin working that way from home. Writing a script while standing just seemed like an awesome humblebrag. It had been almost a year of the sofa-as-office working during Covid, and I was creatively jazzed about the physical change of pace. Coincidentally, my butt had been kind of sore lately … which I just attributed to way too much sitting at the time and a sign I needed to stand up more.

After a couple of days, I suddenly began having pain “downstairs” when I was standing. That was back when all those medical references had cute self-conscious nicknames like “downstairs" and “output.” A year and a cancer battle later, we are absurdly to the point now when it comes to conversational medical terms.

“Not bad. Didn’t crap my pants last night. Thanks for checking in, babe.”

Anyway, thinking the standing desk the culprit, I took to sitting again, which began to soon hurt, too. So all I could do was lie down most of the days, hoping it’d heal on its own. My humblebrag about writing-while-standing quickly turned to writing-scripts-on-an-iPhone. And now my thumbs hurt, too, though unrelated to the cancer.

It was sort of your classic slow-boiling frog scenario. You rationalize discomfort. You can easily put off a copay or a test you don’t want to pay for. You can (literally) flush anything away that scares you and pretend it’s not real. Lose yourself and your sanity in Google. I did for as long as I could — about a month or so — and then I had to go to a GP. Scratch that. I had to find a GP for the first time — because I could not be a more stereotypical middle-aged man — then make the appointment.

We did the “possibly hemorrhoids” dance that all discomforts in that area are required to do. A Preparation H racket? Possibly. But mainly because no one really wants you to have cancer, despite what WebMD tells you. The discomfort grew into a constant pain, and we scheduled a colonoscopy. I discovered as abruptly as you will now that they found an 8cm tumor that apparently had been there “for 5 or 6 years” (?!) in my rectum. Years of comic experience left me as I searched for a good butt joke. It was like I hyper-jumped into a new world that my Tony Stark of an oncologist told me would last about a year if we were lucky. Tony was right. And I was very lucky.

Listen to Kevin and the Alliance’s Andrea Goodman, Vice President of Patient Support and Research Strategy, on the Turtle Tracks podcast. Available for free on SoundCloud.

Most of 2021 turned into a blur of six chemo infusions, chemo pills, vitamins, radiation therapy, RSO oil, a liver ablation surgery (the cancer had spread – hey, I’m an over-achiever), LAR surgery with 14 removed lymph nodes, removing 10cm of colon, a colon resection surgery, a sci-fi chemo chest port and the temporary ostomy bag that nearly broke me as a human being. And yes, a nasal swab Covid test still sucks even when put up against all that.

We didn’t tell a lot of people what we were going through. I felt like I would burden the ones I told and wasn’t being a good friend to those I didn’t. Oh yeah — I discovered therapy, too, and also now know how misguided all that thinking is. I was humbled to realize how much love surrounds you when you choose to see it. Or need to. And if you’re really lucky, you get to have a partner like I did by your side throughout it. My wife became my superhero. And not only has my definition of “family” grown, but this entire process has left that family stronger.

With the dust now settling after my final surgery in November, I’m showing no evidence of cancer, even on a ctDNA genetic level. (We live in wondrous times, my friends.) I’m in what they call “survivorship” — kind of my own personal Squid Games — where I continue to test every few months to make sure the bummer cells stay away, and the chill ones sign a long-term lease. My latest was today, January 10, and I just found out we’re still going strong and cancer-free.

The gravity of everything we’ve been through still hits in waves out of the blue, but thankfully it’s up against a clean bill of health, warm and loving family and friends, and a plate full of fun new creating to come. Life’s pretty awesome.

And just to say it, make sure you get your butt checked when you can. You’re the only one who’ll ever know if something’s off, so listen to your body. Or do it just for the peace of mind, cause man, I would have loved to have found this five years ago. It’s honestly not a big deal, and you can do it starting at 45 now! If that doesn’t sound like a good excuse to take off work for an afternoon and justifiably surf Netflix from the sofa, well, I don’t know what does.

For the record though, and not to brag, but this was written quite comfortably at my standing desk.

Kevin Munroe is a filmmaker, director, screenwriter, producer, animator, and artist who is best-known for writing and directing TMNT. Visit his WordPress blog, Kevin Re-Animated, and his Instagram, @kevmunroe.