As treatment continues, raising awareness among friends and family 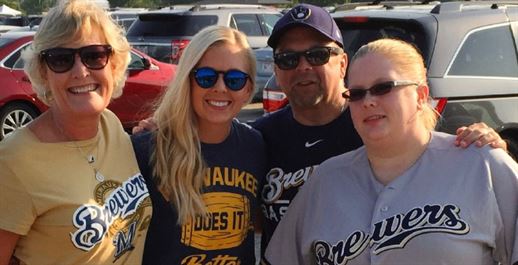 When 57-year-old Rick Bartelson sits down for treatment at Texas Oncology, often he looks around the room, observing people whose futures could be more tenuous and painful than his own. A man who has lived with one lung for most of his adult life, beat rectal cancer, and is now treating a recurrence in his stomach muscle, Rick observes his surroundings and finds a reason for gratitude.

“I’m not naive to the fact of what’s happening, but I also understand there are so many people that have been in and out of this situation, undergoing more aggressive treatment,” he says. “So I’m thankful for the fact that I’m still here and alive and have an opportunity to cure this thing.”

Rick’s journey with rectal cancer began with a ruined dinner and a strange quarter-sized lump on his thigh. He and his wife, Randi, were heading to a table at Plucker’s, an Austin wing joint, when the room began to spin--lightheadedness almost took Rick to the floor. The same episode happened a few more times in the following weeks.

Those occurrences, the lump on his thigh, and Randi compelled Rick to schedule an appointment with his doctor. Once the doctor finished saying the thigh lump was nothing more than a fatty deposit, Rick shared other symptoms he had been having lately--like the presence of blood in his narrowing stool. The doctor ordered a colonoscopy. It would be Rick’s second.

Years earlier Rick had a colonoscopy leading to the removal of six polyps, cellular growths that can turn into cancer if left alone. Combined with knowledge accrued from the web, Rick says he “honestly kind of knew” what was happening.

“All the symptoms were there.”

Immediately, Rick and Randi searched for a doctor they could trust, deciding on Dr. Darren Kocs at Texas Oncology. Dr. Kocs sketched out how they would treat his stage IIa rectal cancer. 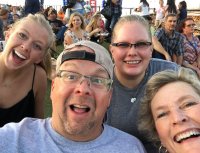 “I think there are a lot of people who are visual, and when you get a diagnosis like this there are a million things filling your head, so when he drew out the treatment regimen, I understood it better,” Rick says.

The regimen included radiation and chemotherapy together, as well as surgery. Colorectal surgeon Dr. John Mangione operated on Rick with robotic technology, which let him make more precise movements—a decision that likely spared Rick most of his rectum. An ileostomy followed and then a reversal, and then more chemotherapy.  Throughout treatment, Rick continued with his daily routine of an early morning walk and working every day, many days with his chemo pump in tow.

For the next three years, Rick had follow-up scans. Scanxiety raged at first, but as the scans continued to come back negative, he felt certain he had beat cancer. Even when one scan drifted a little higher on his body and found three lesions on his thyroid that lead to the removal of his entire thyroid gland, Rick felt that his treatment was behind him.

“I’ll admit, I was getting a little over confident, and then last December, in 2017, they found cancer in my stomach muscle,” Rick says. “And honestly, prior to that scan I had felt as good as I’ve ever felt in my life.”

But he now had experiences from which to draw, even beyond his recent bout with rectal cancer. In 1984, Rick was coughing up blood. Doctors found three cancerous tumors in his right lung, which prompted them to remove the whole organ.

“I think I was inspired that I had lived a long time with one lung, and it hasn’t limited me that much,” Rick says. “Dealing with cancer isn’t necessarily a death sentence, it’s just another way of living.”

This year Rick attended a discussion presented by Cologuard in Austin, featuring Harry Connick Jr. and his wife, Jill Goodacre. He didn’t go to hear about the stool DNA-based test for himself, though. He went for friends, some of whom Rick inspired to get screened and whom ultimately found polyps.

“I talk to a lot of people about getting screened,” Rick says. “There is always hesitation because they’re afraid of the preparation they have to do, and there is so much stigma attached to that, even though it’s not that bad.”

Cologuard is a stool DNA-based test for colorectal cancer screening in average risk adults. The test is prescribed by a healthcare provider and a kit is mailed to the patient’s home. After collecting a stool sample, the patient returns the sample to the lab where it is analyzed to check for blood and changes in DNA linked to colorectal cancer.

“I was interested in finding out more about the product,” Rick says. “If I can mention it to someone, they try it, and they get a negative result, or if they find a problem early and can be saved, that’s great. The more information the better.”

Rick, a restaurant consultant for Sysco Central Texas, has a lot of colleagues and customers between the ages of 35 and 60. In addition to on-time screening, Rick tells them to talk to loved ones about any family history of cancer. About a third of colorectal cancer cases are likely familial.

“[Family history] can be your roadmap for screening,” Rick says.

Since his diagnosis, Rick has many new reasons to think about his family, but one reason came as a shock.

“I talk to a lot of people about the symptoms of colorectal cancer, but the one thing I didn’t do that I wish I would have is talked to parents about our family health history—it was something that never really came up in conversation,” Rick says. “After I was diagnosed, I was surprised to find out my grandmother had died of colorectal cancer, and I had an aunt and two uncles who had colorectal cancer, too. My parents, who are both in their middle-80’s, are very active and blessed with good health, so it wasn’t a topic I thought much about.”

This is family history Rick takes very seriously. He has two daughters, ages 28 and 31.

“I don’t want to see what happened to me happen to them—or anyone else for that matter,” he says. “If my story does nothing more than inspire someone to go out and get tested, or talk about cancer with family, then what I’m doing is making a difference in someone’s life.”

These days, Rick sees everything a little brighter and a little clearer. The oak tree in his backyard. A random act of kindness. The little things

“I was a salesman, and I was always driven by my next sale, but not so much anymore,” he says. “I think a lot about fighting cancer, and it’s without question a physical fight with side effects that you need to overcome, but I think it’s also a mental and emotional fight, and a lot of the success I’ve had in fighting it is by keeping a positive attitude, battling cancer head on, and trying to appreciate all the blessings in my life.”