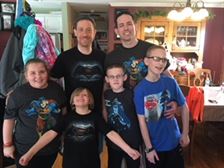 Connor Lawson is crazy about comics and baseball. But unlike most 12-year-olds, he also cares a lot about colorectal cancer awareness. Connor lost his cousin Hal Wolin to the disease in 2016 and will pay tribute to him at the Philadelphia Undy RunWalk on September 8.

Connor is turning 13 in November and, in preparation for his bar mitzvah, he had to do a “good deed,” or mitzvah. He chose to create a mitzvah project in honor of his cousin by leading a team and fundraising for the Philadelphia Undy RunWalk.

“Doctors diagnosed Hal with late-stage colorectal cancer, after they initially thought he had a gallbladder issue,” said Eric Lawson, Connor’s dad. Wolin passed away right after his 40th birthday.

Raising money for colorectal cancer research and prevention was a no-brainer for Connor, who had an incredible bond with his cousin. His team name is Hal’s Heroes, an ode to their mutual love for comics.

“My favorite superhero is Nightwing and Hal’s was Green Lantern,” Connor said. “We would watch superhero shows and movies together as a family.”

Wolin’s family was so touched by Connor’s thoughtfulness that they also joined Hal’s Heroes and will be traveling from Long Island to Philadelphia to participate. So far, 23 people are on the team and they have exceeded their fundraising goal of $1,000.

“Connor said right off the bat that he knew what he wanted to do. He said I’m going to do something for Hal. I’m going to raise money for colon cancer,” said Jenna Lawson, Connor’s mom. “It made us feel like we were parenting right.”

The Philadelphia Undy RunWalk is one of 22 Undy RunWalk events across the United States. It is organized by the Colorectal Cancer Alliance, whose mission it is to end colorectal cancer within our lifetime by providing support services, raising awareness of preventive measures, and funding critical research. Connor will also be presenting about his experience at his bar mitzvah this November. The theme is “Connor Con.”

“I’ve learned that it feels good to do something good. I think I’m going to continue to run with Hal’s family next year,” Connor said.

At least 80 percent of those involved in the Undy RunWalk have some tie to colorectal cancer. While the event raises money to support the Colorectal Cancer Alliance’s mission, it’s also an opportunity to encourage those currently battling the disease, remember those lost too soon, and celebrate those who have completed colorectal cancer treatment.

“No one wants to have their loved one forgotten. He knows it’s important because we want to get this research, to find a cure before Connor has kids,” Jenna Lawson said.

In 2018 alone, more than 6,000 people in a Pennsylvania are expected to be diagnosed with colorectal cancer, and more than 2,000 will die from this highly preventable and treatable disease.