Susan Burke: Up and running after minimally invasive surgeries 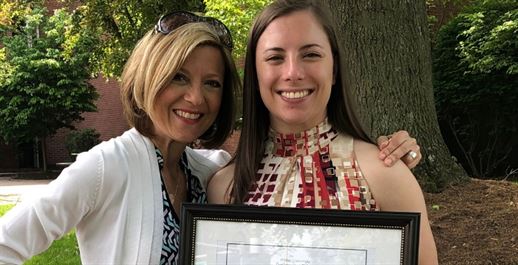 Susan Burke’s journey with colorectal cancer started with an appendectomy. At 47 years old, a pain in her right, lower abdomen for more than a year led doctors to find an appendix that was swollen to three times its normal size.

“I kept saying something was going on,” Susan said. “Finally, I insisted on a CT scan.”

A week later, doctors diagnosed Susan with colon cancer, not appendicitis. The cancer was located in her cecum, the beginning of the large intestine.

The symptoms of appendicitis mirror those of cancer in the cecum, including the inflammation of the appendix.

A month later, Susan had the second of five surgeries to treat colon cancer, an operation to remove the right part of her colon, called a right hemicolectomy. Here she was faced with a choice: an open or laparoscopic surgery. Laparoscopic surgery is also called minimally invasive surgery. Being a “Googler,” Susan watched both types of operations on the internet.

She then thought about the recovery time needed for each type of surgery and how that would impact her career in the fitness business.

“They wanted to do it open, but I insisted on doing it laparoscopically,” she said. “I didn’t want a scar, and I was afraid of herniating because I’m so athletic. With minimally invasive surgery, that was less likely.” 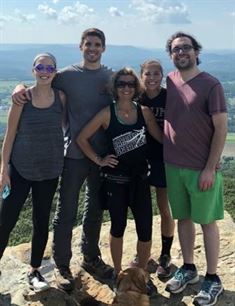 Susan made a good choice. Within three weeks, she was running again.

“My hemicolectomy was July 15, and by the first Sunday of September I completed the Susan G. Komen 5K in support of my friend who was diagnosed with breast cancer,” Susan said. “It was a pretty quick recovery, and not a lot of pain. I just used some ibuprofen.”

Months following colon surgery, Susan underwent a total hysterectomy, the removal of the uterus and ovaries with minimally invasive methods. Doctors used a robotic system that minimizes the need for large incisions.

Up to the operation, Susan had been training for a marathon. A few weeks after the hysterectomy, she ran 8 miles, even though the surgeon advised against it.

“I felt fine, but because of the nature of that surgery, things could go wrong by running too soon, so I skipped the marathon,” Susan said. “I was back in the gym lifting light weights within three weeks, though.”

While the surgery left only small scars, the news afterward couldn’t have been much worse.

“When I woke up, they said, ‘The cancer is in your abdomen and peritoneum,’” Susan said. “My oncologist just said I’d be on chemotherapy for life.”

The peritoneum is a membrane that forms the lining of the abdominal cavity.

Unsatisfied with the chemotherapy-for-life approach, Susan researched treatment options and discovered what’s colloquially called the “mother of all surgeries”—HIPEC, or hyperthermic intraperitoneal chemotherapy.

“It was an extremely open operation,” Susan said. “They cut you open from stem to stern, from breast to pubic bone.”

During HIPEC, doctors removed Susan’s spleen, parts of her diaphragm and liver, and over 50 pebble-like tumors that covered her omentum, which is the sheet-like, fatty layer that covers the intestines and other organs.

Doctors then poured chemotherapy heated to 107 degrees into the abdominal cavity and shaked her torso for 90 minutes, ensuring the chemotherapy reached all the folds and corners of her abdomen. This is necessary because traditional chemotherapy does not cross the blood barrier and cannot access the peritoneum.

“They nickname it the shake and bake,” Susan said. 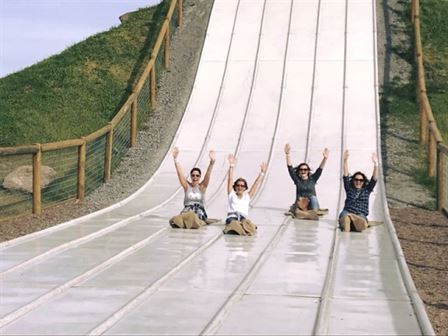 The average recovery time, Susan said, is three months, and she wasn’t back to normal activities for a year.

Having experienced both open and minimally invasive surgeries, Susan has two points of view.

“I was thrilled with minimally invasive surgery,” she said. “Literally right after the hemicolectomy, I was walking down hall with the doctor, step-for-step, the next day.”

Yet, had a doctor conducted an open surgery sooner, Susan said it’s possible he or she would’ve seen the cancer in her other organs.

“It’s beneficial to be on your feet and feeling well, but sometimes they can’t see everything going on,” Susan said. “Put back in that exact same moment, though, I’d make the same decision to use minimally invasive surgery.”