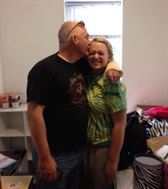 Kaitlyn Anuszewski has always been a daddy’s girl, gravitating towards her father ever since she can remember. Kaitlyn’s father is a firefighter and has dedicated his career to saving lives. Being a child with a parent in the fire department, Kaitlyn always wondered if he was going to come home.

Findings from the 2016 NIOSH survey found that firefighters show higher rates of cancer incidence than the general U.S. population. Kaitlyn’s father had no idea of the increased risk as a result of his occupation and received his diagnosis many years too late.

“He was 46 when he was diagnosed,” Kaitlyn says. “He was in so much pain he couldn’t sit down. He was in the hospital for hours but was told he had a hernia and to go home. He knew something was wrong. He scheduled a colonoscopy and found that it was stage 2 colorectal cancer in 2014. They told him he’d had the cancer for years.”

Learning of the diagnosis was unbearable for Kaitlyn. “I couldn’t be in the same room. I just couldn’t process.” Having grown up with the fear of not knowing if her father would come home after a night of work, she experienced the same fears. “He wasn’t fighting fires anymore but I thought “is he going to make it to my graduation?” or “will he make it to my wedding?”

Throughout the chemo, radiation, and surgeries, the camaraderie and support of the fire department was unstoppable. Kaitlyn found peace in the outpour of support her family received from the fire department. “Local fire stations came out, bringing trucks by to visit and providing numerous dinners. The fire department is a brotherhood. They’re all supportive, always sending messages of encouragement. It makes you feel supported. This can be a very isolating thing. Every situation is different and knowing that they have your back not only going into fires, but for everything is amazing. They support our entire family though everything.” 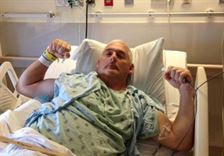 In February of 2017 a tumor was found in her father’s left lung. From there multiple tumors were found in his right lung.  The cancer spread to lymph nodes and is now in his bloodstream. He is currently in chemotherapy every other week receiving treatments. Kaitlyn’s support for her father and for future fireman continues on.

“I like to advocate on his behalf because he’s not always able to. I’ve been doing as much as I can to raise awareness. It’s never talked about. You don’t ever hear about firefighters getting colorectal cancer. You have young kids coming into the academy and coming out. They don’t really know what could happen. It’s there but it’s this mystery to people. Nobody’s talking about it. People need to know this.” 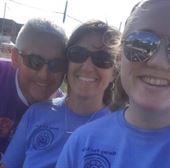 Kaitlyn’s father was diagnosed under the age of fifty with a cancer he was unaware of for years. Her relationship with her father means the world to her and she takes nothing for granted. “I try to talk to my dad as much as I can. We’re there for each other. I always tell him I love him. Every phone call I end with I love you.”