How Colon Cancer Prepared Ed For His Next Two Cancer Diagnoses 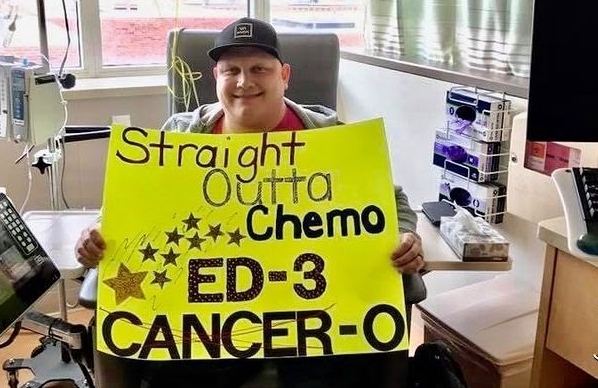 You may recognize the name Ed Yakacki from our previous blog called “Somewhere I Never Thought I Would Be.” But if you don’t, Ed was diagnosed with stage IV colorectal cancer at 30 years old. Over a year and a half, he had undergone ten different surgeries, chemotherapy, and radiation. After having complications with his ileostomy reversal, he had a hard time transitioning into having an ostomy full-time, mentally and physically.

In 2012, Ed spent his 34th birthday at the Colorectal Cancer Alliance’s Undy RunWalk surrounded by other people who have been impacted by the disease. This is where Ed realized he needed to shift his mentality from “feeling like a victim and start looking at myself as a survivor.” This mindset has been with Ed ever since our last story on him. However, now, it holds a whole new meaning. 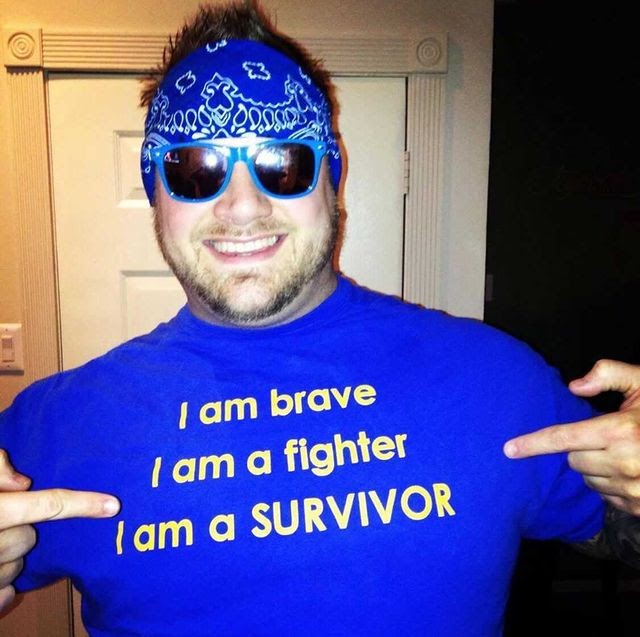 Ed was diagnosed with an extremely rare, incurable thyroid cancer in 2016 after he went to the doctor to discuss breathing issues and back pain. “My CA levels have always been elevated, even after my colon cancer treatments,” says Ed, “but it was also high because of my thyroid.” This was seven years after the original diagnosis of Ed’s colon cancer.

“When they took out my thyroid, it was the size of a tic-tac. My doctor said that even though it is the smallest in size, my thyroid cancer is the most dangerous one and long-term treatment is mostly surveillance,” says Ed. Yet after he had his thyroid surgery, he was still experiencing severe pain in his back and left leg. Ed went to his doctor again to get a PET scan, and it showed that Ed has a lesion on his back. After going from hospital to hospital, doctor to doctor, and scan to scan, they finally had an answer. 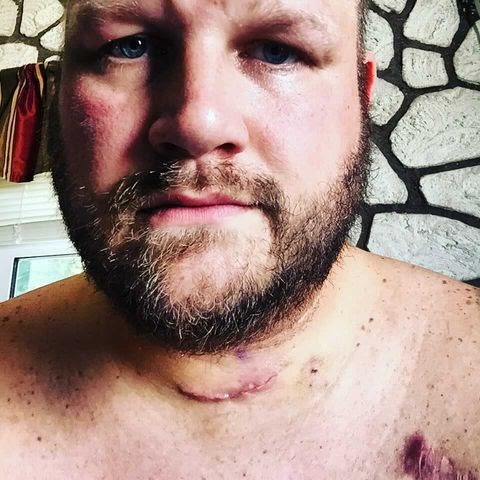 Ed was diagnosed with Ewing’s sarcoma, a pediatric bone cancer that is extremely rare in adults, that same year. “My doctor said that he usually takes a cautious approach to a tumor like this,” Ed mentions, “but he thought if he didn’t do surgery now, I could potentially be paralyzed in the next couple of months.” Ed had his surgery to fuse his T10 and T12 after they removed the tumor from that spot. Three weeks later, on his 38th birthday, he found out the tumor was cancerous. On that same day, Ed and Amanda found out they were pregnant.

“I wasn’t thinking straight, and I didn’t even know if I wanted to do the treatments because of the horrors I had with colon cancer. But I was talking with my father and my wife, who both have been my linchpins since the first diagnosis, and they said that I needed to at least try. So I did,” says Ed. 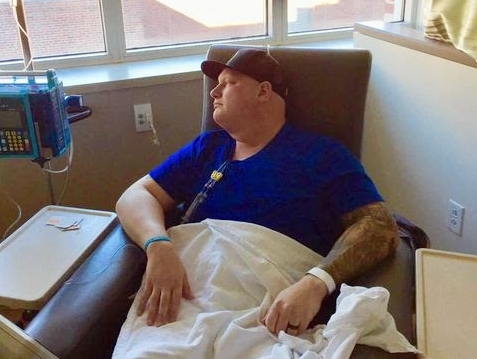 He went on to have a double port put into his chest for his Ewing’s sarcoma since the treatments are so intense. Quickly afterward, Ed had his first treatment. “This was different than when I had my port put in for colon cancer. Before I had my port put in, and then I had to wait a few weeks before I started my treatments. However, with this, I went from one treatment directly to the next on the same day.”

Another major difference was the location of Ed’s treatments. “My colon cancer regiment was all located in New Jersey (where I live), but now everything was based in Philadelphia. My dad and I were so used to our old routine when dealing with colon cancer, so we were both out of our elements.”

Every day presented a challenge for Ed as he was now dealing with new, more intense side effects with these new treatments than he did with colon cancer. With these side effects came the need to have seven blood transfusions. However, during Christmastime of 2016, Ed discovered he had three blood clots in his lungs.

“I would take two steps and feel like my heart was going to come out of my chest. So now I’m taking shots for the blood clots, different pills for different things on different days … I’m was like in the middle of trying to put together the puzzle that is my diagnoses,” Ed says. “As I am bouncing back and forth between the doctors and home, there were weeks when they would say that we couldn’t do treatment. Once I heard that, I would celebrate! With my colon cancer treatments, I was very adamant about getting in and getting them done quickly. But this time around, I was embracing the time off — almost crying out of happiness!” 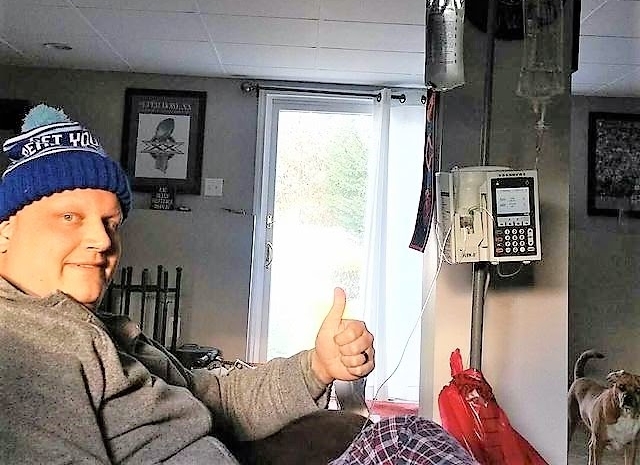 It wasn’t always about the long-term goals for Ed. It was also about the small victories along the way. “My wife found out we were having a baby boy, and I told her my goal was just to meet him,” Ed reveals. “Amanda didn’t like the sound of that, but setting those short-term goals helped me get through this. Every week I would have one, so I knew what I had to prepare for.”

With the short-term victories in mind, Ed faced each time his finish line was pushed back with stride because he knew there was an end eventually. “When I was told about my treatments getting longer and longer, I told my doctors that I didn’t care how long they were, as long as I was able to ring that bell.”

A New Life in More Ways Than One

Ed took off a month of treatment for the birth of his son, EJ, but then Ed’s legs started to bother him again. Once he got an MRI completed, they showed a lot of fluid on his hips and that he would need a hip replacement. “This caused my finish line to be extended even further because I couldn’t have my hip replaced until I finished radiation.” At this point in 2017, Ed was 39 years old and he required a cane to walk. Unfortunately, a few months later, Ed had to get his other hip replaced. “I was scared to do radiation because of my experience with colon cancer. But my doctors reassured me that it would be different this time, and it was. I would fall asleep for three hours after each round, which didn’t happen before.”

With everything life has thrown at Ed, he says that he has learned so much from his experience with colon cancer that helped him through his next two cancer diagnoses along with other medical issues.

“Just thinking about how I got through it all gives me goosebumps. Everything I have gone through has made me tougher — psychologically, mentally. My first cancer diagnosis taught me the ins and outs, the right and the wrong way to handle situations, and prepared me for the second and third cancer battles. I also use those lessons toward principles in my everyday life as well. Before I didn’t have patience, but that experience has taught me that, and now I use that every day with my children. My wife had a second child, a girl named Evelyn Mary.” 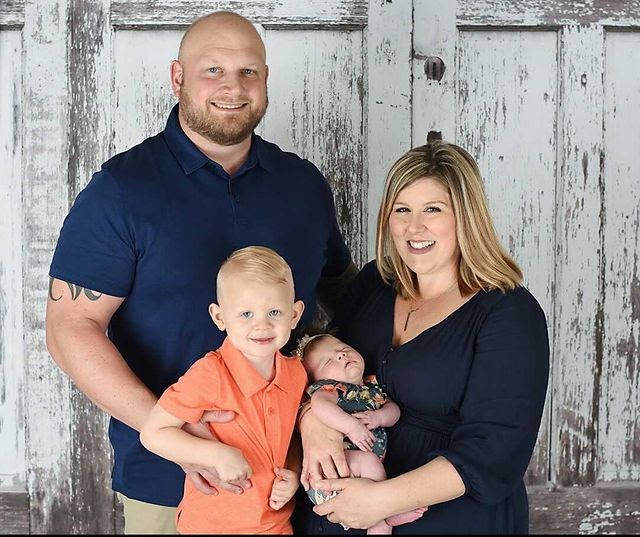 Ed along with Amanda, EJ, and Evelyn Mary

Since Ed’s two cancer diagnoses, he has been a huge ally for the colon cancer community by spreading awareness on his Instagram or Twitter, various talk shows, radio advertisements, and even on the Major League Baseball World Series programs. “I talk to all types of cancer patients across the United States because I can see myself in every one of their shoes — that’s what cancer does to people. I can tell them how I handle certain things, but I always remind them that each story is different. There isn’t a rulebook on how to tackle these situations. What you can do is fight — not fight for your old life, but fight for a new life. I’m not saying it’s going to be bad; it’s just going to be different, and that’s okay.”

Ed has been called the G.O.A.T. (Greatest Of All Time) by many people after they hear his story, but he likes to remind people that he is a fighter, but, above all, he is a survivor. 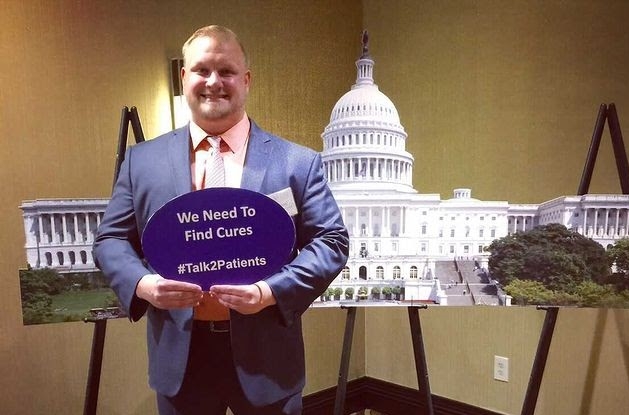