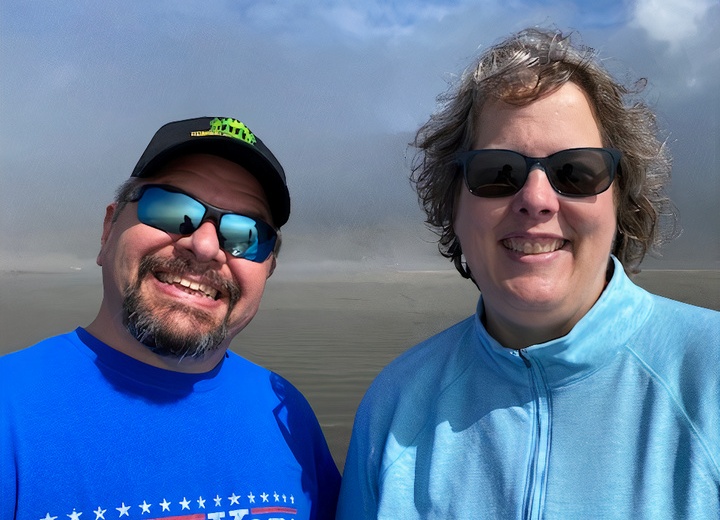 As the Blue Hope Bash: One Nation Forward streamed live from Washington, D.C., on November 13, Tom Snyder and his wife Chris were relaxed at home in Eureka, California.

“We talked about how Saturday was the Bash,” said Tom, a newly minted five-year survivor of colon cancer. “But I had forgotten about it — thank you, chemo brain.”

Had they been watching, the voicemail Tom received from NBC News anchor and Bash emcee Craig Melvin a little after 5:30 pm PT would have been less surprising.

Hundreds of people across the nation watched as Craig tried to call Tom. The first attempt ended with a wrong number. The second ended with a voicemail.

“Thomas, Craig Melvin here,” the message said. “Call this number back. You won a Porsche.”

In D.C., the Bash moved forward. A Rolex was given away. Then Alliance Board member Avi Benaim took the stage. As Avi spoke, the Snyder household was falling into a frenzy.

“I called over my wife and played the message, and she looked at me and said, ‘Oh my God, you won the Porsche!’” Tom said. “She started freaking out, and I went into hysterics. When I could catch my breath, that’s when I called the number back.”

Tom and Chris had been married just seven years when excruciating abdominal pain sent Tom to the emergency room. Their life together had only begun, and now it was threatened by Tom’s colon cancer diagnosis at age 44.

“It was pure shock,” Tom said. “It wasn’t until later on that night that fear for my family set in. What were they going to do?”

Tom resolved to fight. He changed his diet. He walked a lot because doctors said it was the best thing he could do after surgery. He took a full course of chemotherapy. 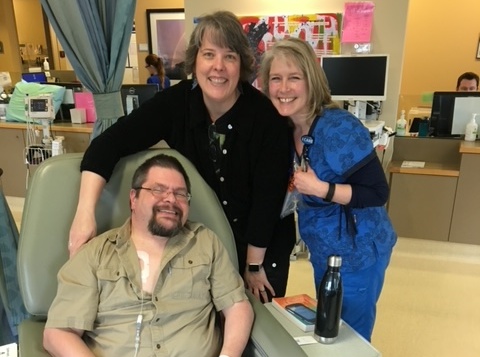 Tom and his wife Chris during treatment in Portland.

“The first time you wake up and the pillow is full of hair that had fallen out because of chemotherapy, that’s when it sets in,” Tom said. “There are all these little things that happen throughout the journey that smack you upside the head.”

Once, during surgery, he nearly died.

“I was my surgeon’s ‘Save of the Week’ at the hospital,” Tom said. “She literally told me if they delayed surgery another hour they wouldn’t have been able to save me.”

A later surgery tied up loose ends, and Tom was on his way to survivorship.

For years, the Blue Hope Bash car raffle has had a place in the Snyders’ life together. Since Tom’s diagnosis, they have bought Porsche raffle tickets for each other as anniversary gifts, although they never expected to win.

“Our thought process is that it’s a donation to the Alliance to help out other people that get diagnosed,” Tom said.

Every dollar earned in the raffle goes toward the Alliance’s life-saving programs to screen, care, and cure colorectal cancer, as the car is donated each year by generous allies Jay and Lyn Ferriero.

After Tom listened to Craig’s message, he needed a moment to calm himself before calling back.

“I was so nervous and freaked out and full of joy,” Tom said. “It was just the most surreal, happy, nervous mix of emotions all at once.”

It was also, as Tom said, “the cherry on top of a nasty journey.”

In September, he and his wife traveled to their treatment hospital in Portland for his five-year scans, the point at which most cancers are considered to be cured.

“That’s the scariest ‘C’ word they will ever say to you,” Tom said. “You’re just waiting for the other shoe to drop.”

But for Tom and his wife — a selfless caregiver who was at Tom’s side for every twist and turn of his cancer journey — the only thing dropping was a set of keys to a brand new car.

“The effort it takes to get to the five-year mark is insane, all the sacrifices that my whole family made to get us to this point,” Tom said. “To win the raffle within a month-and-a-half of getting that final NED is just phenomenal. It’s hard to put into words.” 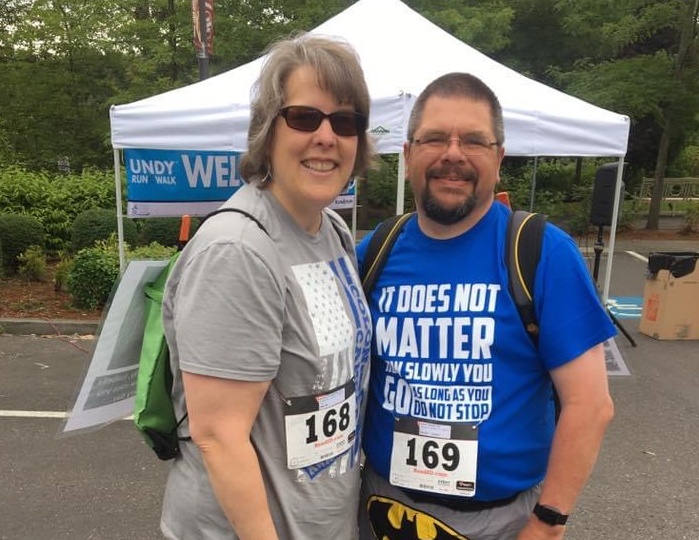 Chris and Tom at the Alliance's Undy RunWalk, the precursor to the Walk to End Colon Cancer.

As Craig noted when Tom returned his call, he certainly deserved the winning ticket.

So what will Tom do with the car?

He’s working with the dealership to turn it into cash, he said. He’s thinking about building a shop, so he can fix up his 1972 VW Karmann Ghia with a roof over his head. Or he might use the money for a downpayment on a new home.

The jury is out until after tax season.

“It’s so exciting, but living in California, bringing in a car like that is crazy,” Tom said.