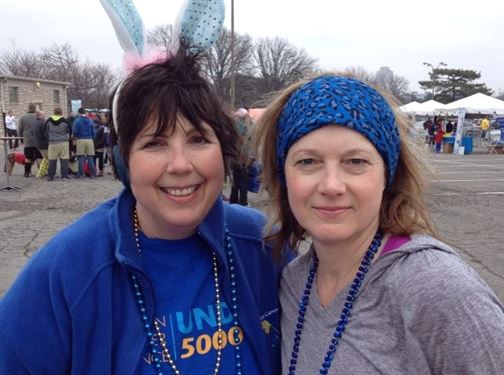 The day after Christy Fry was diagnosed with colorectal cancer, she turned on her television to see hundreds of people running in their underwear. It was March 27, 2010.

Media were reporting on the St. Louis Undy RunWalk, then called the Undy 5000, an annual 5K event hosted by the Colorectal Cancer Alliance to raise funds and awareness for prevention, research, and patient and family support.

“I really felt like I had an immediate connection,” Christy says. “I’ve had a team every year since 2011.”

Fry was diagnosed with rectal cancer after she noticed a change in her bowel movements. She thought it might have something to do with a change in diet over the holiday season. But a prescient conversation with a nurse prompted her to monitor the issue. She decided to follow up with her physician, who conducted a rectal exam. The results were normal. To be certain, her physician recommended a colonoscopy.

The colonoscopy revealed two tumors located in her rectum. She was immediately given a CT scan and urged to find a good colorectal surgeon.

“I never had a chance to fully process it before telling my mother,” Christy says. Her mother was in the room with when she received the news of her diagnosis. “After my CT scan, I asked for a moment alone and I just sat down on the floor and cried.”

Following her diagnosis, Christy underwent a combination of chemotherapy and radiation as well as surgery.

“We were able to save my rectum, so I didn’t have to have a permanent ostomy,” Christy says. “A few years later, they found three tumors in my lungs. After a combination of radiation and surgery, I’m doing good now.”

This past February, Christy reached the five-year anniversary of her last chemo treatment. Since then, Christy has retired from a career in hospitality and has dedicated her life to serving others and spreading awareness about colorectal cancer.

“I’m always looking for more ways to connect with people,” Christy says. “I set aside some money and this allowed me to retire at 51. I’ve started a cancer ministry at my church and I’m also a Buddy with the Colorectal Cancer Alliance.”

The Buddy program is a mentor program for colorectal cancer survivors to connect with other survivors who’ve had similar experiences and diagnoses. Christy will also be at the 2018 St. Louis Undy RunWalk on March 24 with her team, “Christy’s Cool Cohorts.”

“What’s nice about the Undy is it gives me an opportunity to not only raise awareness in a fun way, but it’s also a way for me and my family to celebrate that I’m here and I’m healthy,” Christy says.

“[The Undy] is a celebration, and it also brings awareness so that other people do not have to go through this,” Christy says.