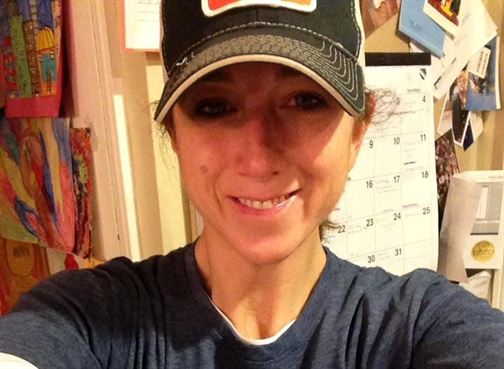 The symptoms of colorectal cancer Carrie Trippe Peck read about online matched her own. She had noticed blood in her stool, and then she became constipated and fatigued. A relative had colon cancer once, but the possibility that she could have it, too—that seemed unbelievable. She was only 43.

“I just thought there was no way,” she says. “I’m so young and healthy. I’m a runner, and I eat well and take care of myself.”

Still, Carrie’s husband Matt urged her to see a doctor, who then referred her to a gastroenterologist. During the appointment, the doctor started asking questions.

“I started giving him all the right answers,” Carrie says.

Do you have a family history of colorectal cancer?

Do you have these symptoms?

Do you have a family history of polyps?

That’s when the doctor recommended a colonoscopy, which took place on Christmas Eve of 2014. The doctor found 10 polyps, and was able to remove all but one. He said they’d need to remove the last polyp surgically.

And then the doctor said something a little startling: “Don’t worry about it over the holiday.”

Carrie remembers how she and her husband looked at each other then. The odd tone of the advice—“don’t worry about it over the holiday”—reverberating between them.

“When we got the call with the diagnosis, it was surreal,” Carrie says. “I was standing in the kitchen making dinner, and I picked up the phone … they said I’d have to have surgery, and here’s the name of a surgeon at local hospital ... it was shocking.”

Ultimately, they said it was stage III colon cancer.

Carrie’s diagnosis is part of a growing trend affecting adults under age 50. Since 1994, cases of young-onset colorectal cancer have increased by 51%, according to the National Cancer Institute. Researchers aren’t sure why.

Carrie says she was embarrassed and ashamed that she didn't understand her own family health history and its significance. Today, when she posts about National Colorectal Cancer Awareness Month on social media, or talks to people about it, she emphasizes not just what the symptoms are, but also what the risk factors are—like what polyps are, their significance, and what are irritable bowel syndrome and Crohn's disease.

“Basically, I encourage people to understand their bodies, recognize changes, and talk with family members about health history,” she says.

As Carrie entered a rapid pace of treatment, her behaviors started to change. She avoided stories about cancer and stories about death from any cause.

“I think there was an ESPN sportscaster who died—not even from cancer—and I turned off TV, and I said I didn’t want to hear it,” she says.

Carrie was afraid. She had a fear that the disease could kill her. But as she struggled—even to walk, sometimes—help and support came from everywhere. Friends and family texted. They sent flowers. They gave her two children rides to school and activities. They never let her worry about anything, she says. At home, Matt kept things moving, too.

“I often refer to my friends as my personal flotation devices because I felt like they literally carried me through that year of treatment and surgery,” Carrie says. “It made what was a very dark and scary time one filled with a lot of love and a lot of hope. I truly believe had it not been for them, I would have crumbled to pieces.”

Carrie also is thankful for her surgical oncologist at Penn Medicine in Philadelphia and a patient support service called the Breathing Room Foundation (BRF), which regularly offered meals, rides, help with chores, errands, and even financial support.

“They spoiled my two young children regularly and sometimes unexpectedly,” she says. “The BRF was a safety net that I could always fall back in if I needed it, and even when I didn't.”

The same love that kept Carrie going through a challenging chemotherapy regime she now spreads among the larger colorectal cancer community. Her motivation comes from a very personal place.

“My biggest regret is that I was so arrogant to think that I could be spared something like this in life, and that arrogance could have taken me away from my children,” she says. “They could be without their mother, my husband without a wife. I feel if I can prevent anyone else from thinking that way, that’s what I want to do.”