Through The Window’s goal is to build a story and picture-sharing community with a focus on cancer awareness, support and fundraising. All proceeds support the Colorectal Cancer Alliance.

A photographic tale of cancer recovery

When photographer, Scott Wilson, was diagnosed with Stage IV Colon Cancer and was told chemotherapy meant avoiding direct sunlight, placing serious constraints on his landscape photography career, he set about creating a new Colorado wildlife portfolio, shot entirely Through the Window of his car. The result is a compelling visual journey through Scott’s year-long triumph over cancer, filled with mini anecdotes of some of the challenges, such as neuropathy, which he overcame to combine his passion for photography with a ‘survivor mindset’.

Scott’s purpose in producing the book is to raise awareness of the importance of early detection of colon cancer by creating a photographic ‘stepping stone’ into a difficult conversation; and, if he can, to provide some light relief to patients going through their own treatment process.

Through the Window – a Photographic Tale of Cancer Recovery represents a partnership between Scott Wilson and the Colon Cancer Alliance. All proceeds from the sale of Through The Window support the Colorectal Cancer Alliance. 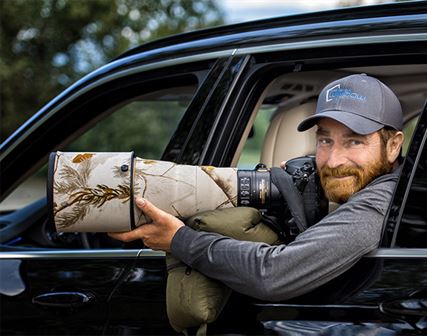 Scott moved from the UK to Denver with his family in August 2015 and was diagnosed with Stage 4 colon cancer in September 2016. After surgery and 40 weeks of chemotherapy at the Rocky Mountain Cancer Centre, he was pronounced NED – No Evidence of Disease – in August 2017.