What is Lynch syndrome?

The genetic mutation for inherited cancer runs in families from one generation to the next, and parents can pass the mutation to their children. When one parent has Lynch syndrome, each child has a 50% chance of having Lynch syndrome.

If you or a family member has a history of cancer, you should talk to your doctor about inherited risk. There are tests available that identify the genes that indicate the presence of Lynch syndrome.

Lynch syndrome is caused by a harmful change (mutation) in one of five genes: MLH1, MSH2, MSH6, PMS2, or EPCAM. The most common mutations occur in MLH1 and MSH2.

Cells are the building blocks of our bodies. When cells grow and divide, the genetic information (the DNA) in each cell has to be copied into the new cells without mistakes. The genes MLH1, MSH2, MSH6, and PMS2 work together as “spell checkers” to correct mistakes as they happen. This quality control process is called DNA Mismatch Repair (MMR).

Mutations in any one of the MMR genes “turn off” their spell checking activity and harm the quality control process. This results in errors in cells deficient in MMR (dMMR). By chance, some of these uncorrected errors will be cancer-causing mutations, causing the cells to grow endlessly and create tumors.

What are the risk factors for Lynch syndrome?

The risk factors listed below (also called the revised Bethesda guidelines) will alert your doctor to consider genetic counseling and genetic testing for Lynch syndrome.

How is Lynch syndrome diagnosed?

Two screening tests can predict Lynch syndrome. Your doctor will take a sample of the tumor tissue (called a biopsy) to do one or two tests.

Microsatellites are short repetitive DNA sequences. This test compares these repetitive sequences from normal tissue against samples from cancer tissue. Significant differences in the number of sequences means there is microsatellite instability or positive MSI-H, common in more than 90% of Lynch syndrome tumors.

This test uses a special staining process to show the presence or absence of MMR proteins (MLH1, MSH2, MSH6, and PMS2) in cancer cells. Presence of all four proteins shows normal MMR function and little chance of Lynch syndrome (unless you have a strong family history or were diagnosed before the age of 50). A lack of staining suggests a lack of MMR proteins and is a sign of Lynch syndrome.

The genetic test used to diagnose Lynch Syndrome is done by collecting a blood or saliva sample and sending to a diagnostic lab for MMR gene mutation analysis. Sometimes other genes will be tested for mutations too. Genetic counselors can help you understand the results and answer any questions.

When You Get A Positive Diagnosis

Here are some important things to know:

People with Lynch syndrome should get screened early and often. Talk with your doctor about a screening plan to reduce your risk of developing colorectal or other cancers.

Start at the age of 20-25, or 2- 5 years younger than the youngest relative who was diagnosed with colorectal cancer.

What To Do With Polyps

Other Important Things to Know

Here are some other important considerations. Talk to your doctor about your options. 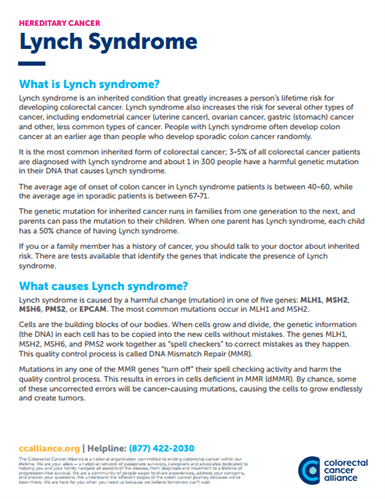 Learn about the role family history plays when it comes to colorectal cancer prevention and screening.

What is FAP syndrome?

Learn more about familial adenomatous polyposis (FAP), an inherited disorder characterized by cancer of the colon and rectum.