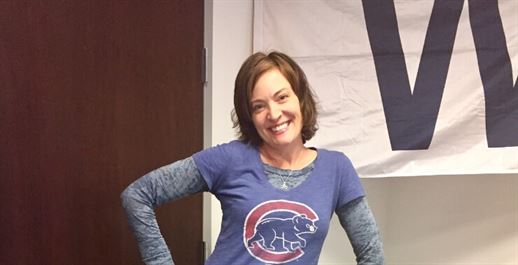 Chicago resident Jessica Catlin, 42, had been having occasional rectal bleeding for about a year when finally she was referred for a colonoscopy.

“While my doctors were convinced that I, at 38, was too young for colorectal cancer, I was still worried because my grandmother had died of the disease,” Catlin said.

Her doctor asked her to “come in” to get her colonoscopy results.

“Well, my parents knew what that meant, so we went together,” Catlin said. “When the GI gave me the results, stage III rectal cancer, I felt so scared. I called my best friend, and I couldn’t even speak. We just cried together.”

Catlin will unite with allies at the Chicago Undy RunWalk on June 1, where she will tell her story, one entirely too common in the United States, with a special focus on young-onset colorectal cancer.

Colorectal cancer remains the fourth most diagnosed and second leading cause of cancer related deaths among men and women combined in the United States. In Illinois, more than 6,000 people are expected to be diagnosed in 2019 alone.

“I want to raise awareness about the rising incidence of colorectal cancer in the under-40 crowd because I was symptomatic and ignored before I was diagnosed,” Catlin said. “Colorectal cancer is such a slow-growing cancer, this could’ve been growing for years.”

Since 1994, cases of young-onset colorectal cancer have increased by 51 percent, according to the National Cancer Institute. Researchers aren’t sure why, but the Alliance is funding research to help uncover a cause.

“After I got my diagnosis, my doctor assured me the disease was very curable,” Catlin said. “And that’s when the whirlwind began.”

That was three years ago, and today Catlin is thriving.

“I know that not everyone is as lucky as me, especially young people who are often diagnosed at an even more advanced stage,” Catlin said. “But that’s why I’ll be at the Undy—so more people and doctors are made aware of this disease!”

The Chicago Undy RunWalk is sponsored locally by AbbVie and Epi proColon.