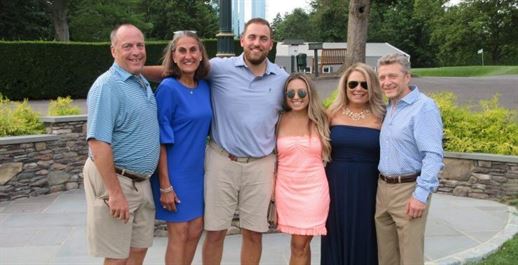 Ken Kiess had a relatively normal life, building his career and enjoying time with his wife. But on December 27, 2014, Kiess walked into the emergency room with a pain in his side and learned he had stage IV (metastatic) colon cancer.

Kiess battled colorectal cancer with bravery and humor, but within two years the nation’s second deadliest cancer had taken Kiess’ life, too. More than 9,000 people will be diagnosed in New York with colorectal cancer in 2019, according to estimates, and as many as 2,890 will die.

Determined to help the Colorectal Cancer Alliance (Alliance) end this deadly yet preventable disease, the Kiess family founded the Ken Kiess Memorial Golf Tournament in 2017. This year’s event, held August 5 at North Hempstead Country Club, was the most successful yet.

In memory of Kiess, 94 golfers raised more than $50,000 in one afternoon. The money will support the Alliance’s life-saving efforts to screen, care, and cure colorectal cancer.

At the end of the event, Ken Kiess’ brother, Kurt Kiess, reflected on pictures that had been brought to the country club’s dining room. In one, Ken holds a big beer at an Oktoberfest celebration. The image gives Kurt pause.

“If he was around, he would have been right here, having a beer and sauerbraten—his favorite meal,” Kurt Kiess said. “Family and honoring Ken—that’s what it’s all about. We’re grateful for every single person who supports this tournament.”