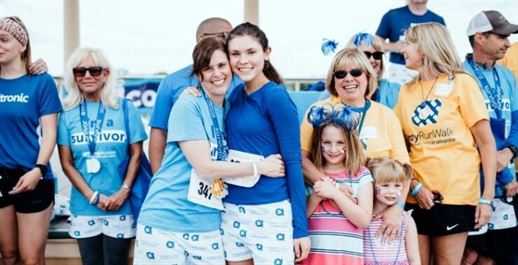 The Denver Undy RunWalk 5K has been a popular fixture on the Colorado fundraising calendar since colorectal cancer allies first wore underwear outside their pants to break the finish-line tape in June 2008.

This year’s Undy, scheduled for June 22 at City Park, carries an important message for the Denver community: “Don’t assume you are too young for colorectal cancer.” The message is based on the “Don’t ASSume” public awareness campaign by the 5K’s organizer, national nonprofit Colorectal Cancer Alliance.

“Colorectal cancer is on the rise among young people,” said Dr. Matt Reveille, a Lakewood-based gastroenterologist and local Undy organizer. “Too many people under 50 ignore symptoms that may be a clue to colorectal cancer because they assume they are too young to have the disease. We are running to change that here in Colorado.”

The underlying cause of the rise in colorectal cancer among under-50s remains unknown and its discovery is a major concern of the Colorectal Cancer Alliance. Symptoms of colorectal cancer include a change in bowel habits, bloody stool, abdominal pain, and anemia.

"Cancer doesn't care how old you are, but we do," said Michael Sapienza, CEO of the Colorectal Cancer Alliance. "The Alliance has committed to investing $3 million for young-onset colorectal cancer research. We are changing the face of this disease."

Young-onset colorectal cancer survivors Stephen Estrada, Kendra Mitchell, and Scott Wilson—each of whom are participating in the Undy—are testament to the strides being made in colorectal cancer research and treatment, supported in part by funds raised during the Denver Undy RunWalk.

“We’re breaking assumptions that colorectal cancer is an old person’s disease and building awareness of colorectal cancer preventability through effective screening,” Dr. Reveille said. “We hope to see the Colorado community coming together in their undies on June 22 to help us to run this preventable disease out of town!”

Register for the 2019 Denver Undy RunWalk at undyrunwalk.org.