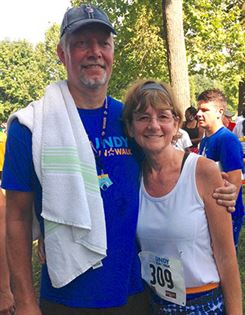 walk-before-you-run-ed-sorensens-undy-victoryIf you were at this year’s Nashville Undy Run/Walk, you may have seen Ed Sorensen run by you! What you may not have known, though, is that Ed walked the Undy last year—just three months after being diagnosed with colon cancer and two months after surgery. After that race, Ed vowed to train so he could run the next year. And he did—with his family, friends and wife Julie rooting for him. We got a chance to speak with Julie and Ed about running in the Undy and why it meant so much to them.

We are Ed and Julie Sorensen. We just celebrated our 32nd anniversary and have three children—they’re 30, 26 and 22. We also have one granddaughter who’s 17 months old.

When and how did you get involved in the Nashville Undy Run/Walk?

We got involved with the Nashville Undy Run/Walk last year when a friend was participating. My husband Ed had just been diagnosed with colon cancer in May of 2014. So that August, Ed and I walked the race with some friends. That day, Ed said he would train and run the Undy in 2015.

Ed, can you tell us how your experience at 2014’s Nashville Undy was different from this year?

The 2014 Undy was my first walk. I had just recently completed surgery two months earlier and didn’t even know something like this existed. Julie and I were used to walking in the Susan G. Komen race, but outside of that I had no idea what to expect. We participated as walkers and did no fundraising. I was very pleased and excited about the Colon Cancer Alliance, what they do and the support they provide (and everyone there was so friendly!).

This year, we got a little more involved: we built a team, did some fundraising and got several of our family members to participate with us. The venue, Shelby Park, was also much more scenic this year and it was nice to see my team members had good runs and did really well in each of our respective categories. We’re all looking forward to 2016!

Julie, how’d it feel to watch your husband run his first 5K? Ed and Julie with their family, friends and singer Wade Hayes at the 2015 Nashville Undy Run/Walk.

I was excited to see Ed run his first 5K. We had 10 people there supporting Ed, including family and friends from four states. I wasn't able to see Ed cross the finish line because I was a walker and crossed after him, but I was so proud of what he had accomplished and happy knowing that he could have been in a much worse place during the Undy. Being cancer free that day was the best thing.

What are you most looking forward to at next year’s Undy?

Next year’s Undy means Ed is two years cancer free! It also means he is one year closer to the five year mark. When we saw the oncologist after Ed's colon resection, we thought we were done and the cancer was gone. Then our oncologist said, “You’re not done.” He was letting us know that we weren’t in the clear until Ed hits the five year mark, so every Undy Run is a milestone that gets us closer to five years. Undy Run 2019 will be the ultimate party!

What does the Undy Run/Walk symbolize for you?

Ed’s cancer was found on a routine colonoscopy at age 53; he was already three years late for his screening, but had no symptoms. I scheduled both our screenings partly due to the fact that our son-in-law's mother had been recently diagnosed with uterine cancer. I believe her story helped save Ed's life. We got screened not to get a diagnosis, but to rule out cancer. The doctors believe that Ed's tumor had been there for over one year. Had we waited much longer our story could have been very different, so every Undy Run is a celebration of sorts—a celebration of life, of good health and of what we could have lost.

To find an Undy Run/Walk near you, visit the Alliance events page. Don’t forget, the Colon Cancer Alliance serves as a source of information about colon health. If you have additional questions about colon cancer screening or are in need of support, please contact our free Helpline at (877) 422-2030. We’re here to help.