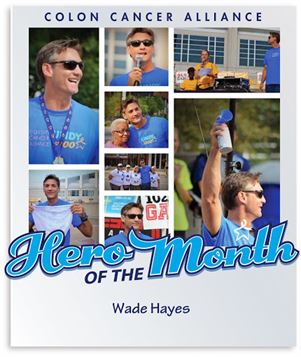 At 42 years old, Wade Hayes was living the country music dream. Divorced with a dog and his guitar, he spent much of his time on stage and on the road for shows. Wade made his break into the Country music scene in 1994 with his Billboard Number One Old Enough to Know Better. From there, his career took off with certified gold albums and peaking title tracks.

But in 2011, Wade was forced to put his life on hold when he received a stage IV colon cancer diagnosis. As a young, healthy guy with no known family history, he was shocked. Soon after his first rounds of chemo, Wade wrote “Is It Already Time” – a heartfelt song about the roller coaster of emotions that come with a cancer diagnosis. And just as he was starting to get back on his feet, he had a recurrence – this time in his lymph nodes.

Despite this devastating diagnosis, after three years of surgeries and chemo, today Wade has ridden the road of recovery and rediscovered himself as a happy, healthy and humbled man. In his new-found health and purpose, he has set out to share his story and help prevent others from going through what he has. We’re thrilled to have Wade joining us at our upcoming summit – Fighting a Smarter War on Colorectal Cancer – where he will speak and perform at the Friday evening reception. Get inspired by Wade – join us in DC in December and read his story.

What was your life like before you were diagnosed with colon cancer?

Pre-diagnosis, I didn’t realize how much I had taken for granted and I think it really took this to open my eyes to it. I’m a hard headed dude and sometimes I have to be hit over the head with a club and that was certainly the club that did it. I’m looking at the world through completely different eyes now and certainly not trying to take anything for granted and trying to make the most out of everything that I can. I appreciate my friends and everything that everyone has done for me. Even just little things, like getting to drive myself to the grocery store and going to the gym. It’s so many things we take for granted every day and I certainly kept my eyes open to them.

Tell us about your diagnosis.

I had actually talked to a doctor about my symptoms when they weren’t quite as severe. At the time, I was really into the gym and we just thought it had something to do with that since I didn’t have a family history and I was in good physical shape.

At 42, we thought I was “too young” to even be considering colon cancer. But once my abdominal pains and bleeding became more severe, the colonoscopy was recommended. When we found out that I had cancer, the doctor told me that my tumor was so large on my intestines that I had cancer for years before I knew it. Looking back on life, I was having symptoms for several years before it got bad enough to get me to go to the doctor. You’re really never too young for this disease.

What was your greatest challenge going through treatment?

I think the greatest challenge for me was overcoming the things that chemotherapy does to your body. I had bad neuropathy and I play guitar for a living. The numbness and tingling in your hands and feet make it nearly impossible to do that with any accuracy. Chemotherapy is destroying soft tissue, so your throat and nose are affected and singing and playing guitar was very difficult. I’ve noticed, maybe as a result of “chemo brain,” my vocabulary has really suffered and being a writer, that can be a challenge. It’s been three years of battling that. I’m just now starting to feel like my old self again. I don’t know if I’ll ever get it back to 100%, but I feel better. In the big picture, I look at it and realize I’m still around. I’m still here and I’ve got the opportunity to hopefully help prevent somebody from going through what I did.

What would you like the world to know about early detection of colon cancer?

You know early detection is key with colon cancer – we’ve all heard and know that. But so many people just let it go in one ear and out the other unless you’re directly affected by it. Sometimes I think, what if? What if I had caught this earlier? I would still have my internal organs and I wouldn’t look like a baseball when I take my clothes off. But I didn’t and as a result, I had stage IV colon cancer. So trying to encourage people to get tested early and not end up like this is my main goal.

About 1/3 of the people who should be getting screened in the US aren’t. What’s the message you’d like to give to this reluctant bunch?

If they have just a second, I would ask them to listen to my story. I was a healthy male who had no reason to have cancer. If you’re having any symptoms whatsoever, you need to get checked out. If you have any family history of colon cancer or other related diseases, regardless of your age, you need to get screened. And if you’re 50, you need to have a screening regardless. You do not want this to happen to you. My life was forever changed the moment the doctor walked in gave me the long-faced. However long I may get to stay on this planet, it’s changed forever and it’s a change you don’t want.

Now knowing where you are with your cancer journey, how do you feel about your song ‘Is it Already Time’?

I wrote that song when I was going through chemo the first time. I started reading the statistics about my cancer and I realized how much trouble I was really in and it was not a good time. I look at that song now – I’ve come so far; I don’t want to sing that song anymore and I don’t. That was a therapy session for me, writing that song. But now I want to be hopeful and I want to offer others hope.

This is a mental fight as well as a physical fight and you’ve got to put your head down and move forward no matter what. My oncologist told me a story about one of his patients who had been diagnosed with nearly the same thing that I had, the same symptoms and everything. He was still alive eight years after his initial diagnosis and that gave me so much hope in a time when I really needed it. I’m hoping my story can be a catalyst to give somebody the hope that I felt that day.

That’s why I wrote my song ‘Go Live Your Life.’ That song has been a real blessing to me. ‘Go Live Your Life’ is a picture of that hope and not only that, but I’ve realized how much I missed out on in my life. I don’t want to be that guy anymore. This life is precious and it’s flying by for all of us. Don’t let it take something like what happened to me to open your eyes to it.

How would you like to help get the word out about colon cancer?

There’s certainly a stigma about colon cancer. It’s not something you bring up in casual conversation; you kind of have to have a starting point. But whenever I’m given the opportunity, I want to talk about this disease. I want to make people aware that this cancer can happen to you. You’re looking at a guy who had no reason. You look at my whole situation; my age, my health, no family history, the way I ate. There’s no reason why I should have stage IV colon cancer, but I did and it almost got me and I want people to know that this can happen to you. No matter how you’re feeling at the time, have it on your radar and if there’s anything that makes you think you might need to get checked, get checked!

What is the one thing you’d tell someone that’s newly diagnosed?

To meet Wade at our summit in December, register now! And don’t forget, the Colon Cancer Alliance serves as a source of information about colon health.  If you have additional questions about colon cancer screening or are in need of support, please contact our free Helpline at (877) 422-2030. We’re here to help!