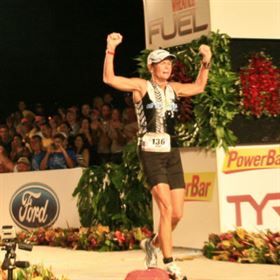 Teri Griege is a competitive triathlete, marathoner and Ironman champion. But she is no ordinary superwoman. In 2009, following the Louisville Ironman, she began experiencing injuries and fatigue. Months later, she was diagnosed with stage IV colon cancer and given a six percent chance of survival. Despite the devastating prognosis, Teri refused to let the disease get in the way of her dream: competing in the Ironman World Championship in Kona, Hawaii. In 2011, while still undergoing chemotherapy, Teri crossed the finish line in Kona at age 50. And now, you can read more about Teri’s life in the new book Powered By Hope: The Teri Griege Story, her inspirational story of alcoholism, cancer and beating the odds. Check out this sneak peek, and support our lifesaving mission by getting your copy through AmazonSmile.

They say you can hear it for miles. It is a distant reverberation, a barely perceptible clamor that slowly separates itself from the softer sounds along Alli Drive. You hear it before you realize what it is, but as your weary legs carry you ever closer, you know. It swells in the darkness. It thrusts reality before you. It jars you into a consciousness you have methodically buried and denied over the course of 140.6 miles.

It is the finish.

The finish line at the Ironman World Championship in Kona, Hawaii, rivals Times Square on New Year’s Eve. Ask anyone hovering within the neon glow of the lights and flapping banners and pulsating dance music and giant screen broadcasting the triumphant celebration as each of the eighteen hundred participants crosses the finish line—ask the athletes, the spectators, the volunteers, anyone. The energy intrinsic to an event designed to challenge the elite of the world’s elite athletes to the ultimate test of physical endurance is overwhelming in and of itself. Add to that the unique trials suffered and victories celebrated by each athlete—both in the race and throughout training—and you have a finish line scripted for a blockbuster film.

Fourteen hours and fifty minutes after wading into Kailua Bay, a lean, tan woman with a giant smile and a blonde bob makes her way across the final hundred yards of the course. She takes her time, slapping high fives and sharing hugs with the hundreds of spectators lining the finish chute. She has suffered, and she has endured. She smiles. She laughs. She shouts in triumph. She soaks in every second of her glorious, bold, defiant act. But she doesn’t hurry. Today—tonight—there is no need.

Yes, this race was slower than her other races. She has had a tough go of it over the past couple of years. Chemo has taken its toll on her body. So has the radiation. Multiple surgeries and subsequent infections have compromised her body’s ability to recover. Her stamina isn’t what it used to be. She has struggled to keep up her weight. Neuropathy has settled in her hands and feet. She knows this may be her last Ironman. But none of that matters. Teri’s mission has nothing to do with time, nothing to do with pace, nothing to do with a PR. Teri’s mission is simply to complete the task at hand…

Finally, they see her…

We continue to be inspired by Teri and her countless feats. You can read Teri’s story while supporting the Colon Cancer Alliance by purchasing her book on AmazonSmile. Designate the Colon Cancer Alliance as your charitable organization of choice through AmazonSmile & a portion of eligible purchases go directly to support our mission. Learn more about Teri at terigriege.com.