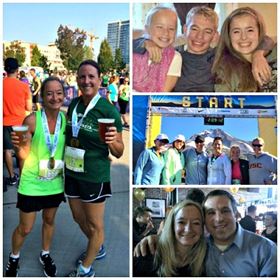 It was 2013, I was 41 and in the best shape of my life. I ran 40 miles a week and was taking control of my life after divorce. Becoming a single mommy to three wonderful children (one with a disability) was a challenge but also a blessing. With a new special guy in my life, I was on my way to happiness... Until that September.

For two years, the only issue I was dealing with was low iron with critical hematocrit levels. I was told I just needed annual iron infusions. However, I became terribly ill and experienced stomach pain and rumbling while working on a huge event, so I went to the ER that evening. Flash forward two weeks—by this time I had been to four different ERs and one immediate care clinic with doctors telling me I was “just constipated and needed to continue to take Miralax.”  I kept trying to stay active and believe them, but I knew something wasn't right.

I was vomiting blood and appeared to be six months pregnant, so we went to a gastroenterologist who performed a sigmoidoscopy. I never expected to wake up to the physician explaining they were 99.9 percent sure I had a blockage and it was a malignant tumor. I had immediate surgery the next morning and woke up with a colostomy.

I was determined to get out of the hospital in less than the normal time; I was out in five days and back running, painfully, two weeks later. I was a fighter.

Later, I went to an oncologist alone—not prepared for the news. The oncologist told me I had stage IIIc and the cancer had been found in 15/26 lymph nodes. I was devastated. It took me weeks to stop crying.

Then I did what many cancer patients do: decided to live a new "normal" and be grateful for each moment. My father always said I should slow down and enjoy life’s journey without worrying about the destination. I found myself appreciating so much more: a sunrise, the way a cool, crisp breeze hit my face on a fall day, my children’s' laughter. Life was always precious to me, but now even more so.

I kept running during chemo; maybe not as hard or as long, but I never gave it up. It was the only thing that kept me from depression and my only sense of normalcy. After I completed chemo on March 26, 2014 and had my colostomy reversal, I ran the Hood To Coast Relay in May—it was the harded thing I’d ever done. It was my worst timed race, but it was one of my proudest moments. I did it! I showed cancer it couldn't take my drive and my heart. I also showed my kids we should thank God for every moment and never take them for granted.

By January 2015, I ran more miles than I had since before I was sick and I was PROUD. I’m still missing feeling in my feet and my hands still struggle, however I wouldn't change a thing besides the worry, but even that reminds me to stay close to my faith and keep perspective.

To learn more about the Colon Cancer Alliance’s Never Too Young campaign and to read more stories of young survivors, visit www.nevertooyoung.org. Don’t forget, the Colon Cancer Alliance serves as a source of information about colon health. If you have additional questions about colon cancer screening or are in need of support, please contact our free Helpline at (877) 422-2030. We’re here to help.