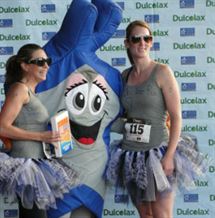 For the past five years, Michelle Meeker has been cancer-free. To celebrate this salient milestone, Michelle participated in the recent Tacoma Undy 5000 5K like she never had before -- as the signature Colon Cancer Alliance Hope star. While Michelle had participated in the Undy as a runner and speaker in the past, this year she brought happiness and inspiration to Undy participants as our ever-smiling mascot. At the end of the event, teams and individuals gathered for an emotional ceremony as Michelle emerged from the costume to share her story. More on Michelle, from Michelle:

In May 2008, my family and I were preparing for my sister's wedding.  The week prior to the wedding, I had a colonoscopy scheduled due to some nagging issues.  I figured it would be a comma in our current life pace to do the test, and then back to usual.  It turned out to be a semicolon pause, pardon the pun.  During my colonoscopy, we discovered the reason for my issues was a 4-5 mm tumor embedded in my sigmoid colon. I must say, if you are going to hear the words, "You have cancer," the best way is right after a colonoscopy when the Fentanyl is at its peak.  They should, however, also give a dose to your designated driver, since they are the first to truly absorb the news.

From that point, we were no longer just in wedding mode, but had CT scans, MRIs and surgeon visits thrown in as the mix. I was scheduled for a bowel resection three weeks later and discovered it was a stage I tumor, so no chemo or radiation was necessary.  Four days in the oncology ward, where it was apparent I was the only patient walking out of there was more than enough of a wake-up call.

After the Tacoma Undy 5000 5K, Michelle emerged from the Hope star to share her story.[/caption]

Since my story turned out to be so easy and uncomplicated (mostly because I had symptoms), I dealt with some survivor guilt and felt the need to give back.  I researched cancer organizations looking for three things:

3) Ways to support the organization, other than financially

Then I saw it.

WHAT?! The CCA has a traveling 5K where individuals and teams can run in undies, walk through an inflatable colon AND the mascot is a Hope star?  Sign me up!

At our first Undy 5000 in 2009, we were a little reserved. But after that, I was hooked. I knew my family and I were going to have to kick up our involvement.

At a later Undy, my 17 year-old son, a drama student, volunteered to be the Hope star.  I decided to volunteer to be a survivor speaker, and I even placed first in 2010 and second in 2011 in the fastest female survivor running time category. Our team name is the Smiling Semi-Colons because my surgical removed 12" of my colon, leaving me with a, well, semi-colon, and we continue to smile about the overall outcome of 5 years of being a survivor.

For the 2013 Tacoma Undy 5000, the event coincided with my five year cured status.  I volunteered to wear the Hope star costume to celebrate.  For the first time in Undy history, I unmasked and spoke about the feeling of being in my fifth year of survival.  The great thing about being the Hope star is the photo bomb opportunities, high-fiving kids and never taking a bad photo. I must say, I loved the bright orange oversized hi-top tennis shoes and cracked one lady up in the rest room when she saw those in the next stall.

Colon cancer doesn't care about your age, your life agenda, your kids or your family; it strikes silently, often without obvious symptoms. Pay attention to your normal elimination habits, and if anything changes, get checked immediately.

In my third survival year, I had a call from an old friend who was preparing for her first colonoscopy, and she was anxious because she had been having issues for SIX YEARS!  Her outcome was stage IV that had metastasized to her lungs and liver; she passed 5 months later. She knew my story and, out of fear and inconvenience, did not get a colonoscopy.  How inconvenient is losing your life versus spending a few hours in a process you sleep through anyway?  Be proactive -- early detection makes all the difference.