"Would I jinx myself if I adopted the title survivor?" 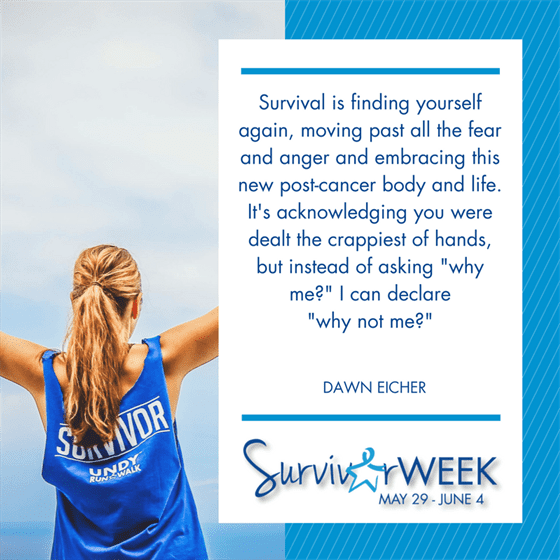 Every story - like cancer itself - is unique. This blog is part of our ongoing 2017 Survivor Week. Join us from May 29-June 4 as we unpack the complexity of what it means to be a cancer survivor, from those who reject the word entirely to individuals who have embraced their diagnosis with a new sense of purpose. What does being a survivor mean to you? This post was written by Dawn Eicher, a stage IV survivor at only age 36. What does being a survivor mean to you? A survivor is clinically defined as a person "who survives, especially a person remaining alive after an event in which others have died; the remainder of a group of people or things; a person who copes well with difficulties in their life." After receiving a stage IV colon cancer diagnosis in April of 2013, knowing that I had metastatic disease, could I designate myself as a survivor? This is a question many of us who have been diagnosed with cancer, especially in the late stages, struggle to answer.

Being indoctrinated into the "cancer world" the past four years, I have witnessed the term survivor debated many times. Are you a survivor while you are treating your cancer actively? Are you a survivor if you have been given a late-stage or terminal diagnosis? At what point do you magically gain the title of "Cancer Survivor" and declare that you're one of the lucky ones to have surpassed the odds and survived this dreaded disease?

I've struggled for the first couple of years to call myself a cancer survivor. Would I jinx myself if I adopted that title? Was I actually a survivor if I felt horrible every day, felt broken and didn't believe I was one yet? Would I announce "I survived," only to have my title stripped after the next quarterly scan? This is the emotional roller coaster that occurs with a cancer diagnosis. I've never had any qualms about retelling my story, but I've always had a phobia in regards to utilizing the term survivor. I purchased a pair of boxing gloves just after I finished treatment in October of 2014.  I was cautiously hopeful I'd remain in the "luckiest of the unlucky group" and stay in remission; however I was scared and quite pensive to actually wear the gloves and celebrate. I was still optimistic that against all odds I'd remain cancer free but part of me was just "waiting for the other shoe to drop." I purchased the gloves on a whim with a grand vision that IF I could stay cancer free, I could don the blue boxing gloves and take some ‘Eye of the Tiger’, Rocky-style pics to celebrate defeating cancer and spread hope to those in fight for their lives. Only problem is I could never bring myself to actually be photographed with them. I couldn't accept I was actually a survivor. I didn't believe I could or should declare I was a survivor because most days I didn't feel like I survived. The "old me" died, and the shell of what was left behind had to start putting the pieces back together again. I had remained alive, lived see another day, but I hadn't survived. Since I purchased those boxing gloves, I had tried to live my life with gusto and meaning. I've striven to put back together the pieces of me that were broken and stolen. To heal, cry, grieve, laugh, accept and live with hope.

I have worked very hard to seize every moment or every day. From going to the park with our kids to heading to my next doctor's appointment, I make it count - every day. It has been harder on me physically and mentally than I could have ever imagined. Cancer and treatment truly wreak havoc on your body. Picture several car crashes occurring back-to-back. A regimen of radiation, chemo, radiation, surgery, more surgery, and more chemo left my body weak and broken; the fallout (no pun) is devastating to your body. The treatment easily aged my body 20 years, and mentally there was a lot of PTSD and fear to work through as well. I had "survived," but I didn't feel like the old ME at all. Mentally and physically I was tired and needed to work on rebuilding both my body and mind. I worked very hard to truly survive and thrive.

After two long years, I was finally able to accept and proudly use the term survivor.  I donned those gloves and partook in a photo shoot to commemorate my survival.  No matter what lies ahead in my future, recurrence or remission, I AM A SURVIVOR! Survival is more than just living; it's finding your "new normal" after treatment. Survival is finding yourself again, moving past all the fear and anger and embracing this new post-cancer body and life. It's acknowledging you were dealt the crappiest of hands, but instead of asking "why me?" I can declare "why not me?" I choose to live in the moment and live each day to the fullest. Worrying about what might happen in the future only robs me of the joy I can experience today, and acknowledging I'm not I control brings me comfort. So, for today, for all the rest of my days, I am a now referring to myself a survivor. And to all my friends still in the fight, you are my heroes. We all have been through what I wouldn't wish on my worst enemy, but you keep putting one foot in front of the other every day. That is survival. That is the epitome of courage, hope, strength and determination all rolled into one. They are the ones I will always be in awe of, and I am so proud of my survivor friends for the sacrifices they make just to stay alive. Cancer, you will NEVER take that from me or from any of us. No matter what you throw our way, we will ALWAYS be survivors. Carpe Diem! Dawn #survivorweek #never2young

Dawn Eicher was only thirty-six years old when she was diagnosed with stage IV colorectal cancer in April of 2013. After fifteen years of abnormal bleeding and seeking answers from her doctors, she was finally given a grim prognosis; however, she was determined to beat those statistics. Fortunately Dawn was one of the “luckiest of the unlucky,” as she likes to say. She battled her way through radiation, chemotherapy, surgery, more surgery and more chemo. With the help of her medical team, the support from family and friends, and a fierce stubbornness she was able to achieve remission. She currently enjoys seizing the day and loving life in Hawaii, along with her two children, Samantha (6) and Jackson (4) and husband, Michael. Since finishing treatment, she has become an advocate for raising awareness on the staggering increase of this disease in the under fifty population, as well as voicing her desire to lower the screening age and revise the current guidelines. She is passionate about saving people from this preventable cancer, as well as supporting patients going through this difficult time. She believes together we are stronger. Dawn’s primary goal is to educate the public and medical community that someone is never “too young” for colorectal cancer.