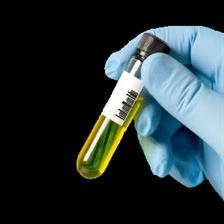 “I didn’t think I was doing that badly, but apparently I was losing ground and the side effects were getting worse.”

After nearly 11 years of ongoing health issues, my energy was fading fast. I’d seen doctor after doctor, specialist after specialist, but no one seemed to know what was wrong. By chance, I remembered that I’d had a colonoscopy back in 2000 and they’d found a polyp. I brought this up to my doctor and, combined with my symptoms, he scheduled me for a repeat colonoscopy.

Judy is the first person in the United States to use Saladax’s My5-FU test to optimize her treatment.[/caption]

And with that, I had an answer to years of endless doctor visits and symptoms: colon cancer.

Two months later, I had a colon resection followed by chemotherapy. I didn’t think I was doing that badly, but apparently I was losing ground and the side effects were getting worse. After 10 treatments, my doctor stopped my treatment regimen and recommended that we start back up again in three months. In February 2008, just a year after my initial diagnosis, I went in for a follow-up colonoscopy. The cancer had spread, with more tumors in my colon and metastases in my lung, ninth rib and possibly liver. I went in for a second bowel resection that March, followed by a more aggressive chemotherapy treatment.

My doctors tried to prepare me for going back on treatment. They told me I would lose my hair, but they also told me about a new blood test that could help make sure that the chemotherapy I was receiving was the most effective it could be. The test was called My5-FU and would assess the dosage of chemotherapy required to reach the therapeutic level for me, as an individual. I agreed, becoming the first individual in the United States to have my 5-FU levels optimized to my body’s response with My5-FU.

I’m certain every person diagnosed with cancer asks, ‘I wonder if this treatment is doing me any good?’ The great thing about the My5-FU blood test was that we could personalize the amount of chemotherapy to my body. Twice we found out that I wasn’t receiving enough 5-FU. Another time, my dosage was too high.

The greatest feeling was coming in to hear my doctor say, “We’re right on the mark – exactly where I want you to be with this drug.”

I finished my last chemotherapy treatment on December 18, 2009. Against all odds, I am now cancer free. It feels like I’ve been given a second chance at life and a new opportunity to help those who are going through cancer. I’ve become the emotional caregiver for a woman at my local grocery store and several other people who became sick from residual cancer treatments have ended up in my care, as did the entire Helping Hands group at my church. In finding the right treatment to heal my own cancer, I’m still here to be of service. The phone rings and I never know who it’s going to be…I drop everything in my life to take care of others.

Want to learn more about chemotherapy dosing? Join us for our free educational webinar June 24th. Register now! And don’t forget, the Colon Cancer Alliance serves as a source of information about colon health. If you have questions or are in need of support, please contact our free Helpline at (877) 422-2030. We’re here to help!

Saladax (MyCare Diagnostics) is a proud education sponsor of the Colon Cancer Alliance.  Learn more about them by visiting our Sponsors page.