One Child With Cancer Is Too Many 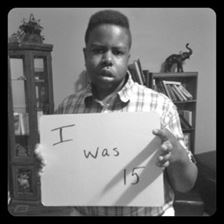 At three years old, he was diagnosed with Medulloblastoma (brain cancer) on February 24, 2000. He underwent chemo and radiation at Brenner Children's Hospital at Wake Forest Baptist Medical Center in Winston-Salem, NC.

After 12 years of survivorship, he was diagnosed with stage III colon cancer last summer – rare in children.

On Wednesday, July 18, 2012, Robert complained to his grandparents of severe pain. We took him to the hospital and CT scans showed an obstruction of the small bowel. That Friday, he underwent a colonoscopy that revealed no malignancy. On Saturday morning, emergency surgery was performed to remove the mass and 23 lymph nodes. What appeared to be a mass blocking the small colon was actually a mass that had ruptured the large colon, blocking the small colon.

A few days later, biopsies revealed malignancy in the colon and five of the lymph nodes. He was allowed to go home on Saturday, July 28th and all he wanted to do was to go to church. I thank God for Robert's faith in the divine healing!

On August 3rd, he had surgery to install the port by which he would receive his chemo. He was on the FOLFOX treatment. The next say he started his first of 12 cycles of chemo. Cycles occurred every two weeks for six months. His chemo port was removed on Friday, August 23, 2013.

The most challenging part of the process was the unknown because of the lack of the number of children diagnosed. Medical professionals, doctors and nurses included, would look at me after finding out he had colon cancer and say, "Oh no!" It felt grim and when I went to the Google info on children with cancer, it appeared that they did not have good outcomes.

So, I stopped looking at the computer screen and began to rely on what we knew best: our faith and the medical professionals who had worked with Robert since he was diagnosed with brain cancer at three years old.

I would like to see more information about children and cancer and what is helpful for prevention in children.

I’d also like to see more research into how this secondary cancer that is rare in children occurred. No one can tell me how it occurred. The only thing I know for sure is that Stephen has no genetic markers. Was it growth hormone? Was it his VP shunt that got infected five years prior? Was it radiation when he was three? Was it his eating habits?

I do know that he is still at risk. I'd like to see more information out there on late effects for children and how to care for them after they have completed treatment.

Advice From a Caregiver

My advice is to educate yourself and don't let all of the morbid information stop you from looking for information like I did. I have always been an extreme advocate because of my son's late effects from the first cancer and this time, it really scared me because..."Kids don't get colon cancer."

To learn more about the Colon Cancer Alliance's Never Too Young campaign and to read more stories of young survivors, visit www.nevertooyoung.org.