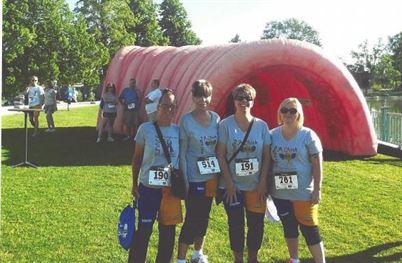 My journey begins just as any other cancer patient's does...unexpected.

When I was 39, I started having pain while going to the bathroom. I thought I had a hemorrhoid. I tried treating myself with over the counter creams. However, it only became larger and more painful. Eventually, I went to a colorectal specialist at Parker Adventist Hospital. Immediately she told me it wasn’t a hemorrhoid. I had a colonoscopy done. I had to have surgery to remove the mass.

Candace with her surgeon, Dr. Lisa Perryman, at the 2013 Demver Undy Run/Walk.[/caption]

When I had my surgery (the first of many procedures), my doctor/surgeon told me the mass could have been growing for up to 10 years, and that it was four inches long. The mass had spiraled around the base of my colon. I spent the weekend in the hospital in extreme pain. The doctor mentioned to my mother she suspected it was cancer, but we’d wait for the pathology report to come back. The pathology came back negative for cancer.

Three months later, I was still having problems. Another procedure was performed. When I visited with my doctor on my follow-up, there was 1 mm of cancer in one of the biopsies. She performed another procedure one week later and the pathology came back – ALL CANCER. I was told I had to have a permanent colostomy bag with chemo to follow. I did all of it. Not always easy.

Six months later I was back at work. Three years later, I’m still here. My journey inspired me to write a poem entitled “A Survivor’s Journey.” I’m proud to say 2012 marked the first year I was well enough to participate in the Undy Run/Walk. I had family and friends with me. I was amazed at all the supporters at this event. Standing on the survivor stage looking out at everyone in the park and those on stage with me made me realize anything is possible and we are not alone. I’m honored to share my poem with this community and hope it can provide some courage and strength to those who are in need.

The Dr. tells you

So much left unsaid and undone

Sinking into the darkness of the “unknown”

The feeling of meeting your maker

Will I ever rise above?

A feeling of helplessness

But you continue to make your way

In hoping the next day is a better day

And when you have a better day

You begin to see it can be possible

Seems to becoming further away

So you start to believe

I will beat this ”monster”

And a new prospective on life develops…

And a feeling of survival begins to emerge