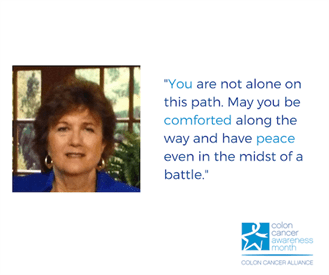 Doctors gave Merilee Koss only two to four months to live after they diagnosed her with a rare form of colorectal cancer. Now, five years later, she is thriving and spreading the word about screening and positivity. Read her inspiring story and find out what she wants you to know this Colon Cancer Awareness Month.

How were you diagnosed?

I was diagnosed by a wonderful doctor who actually canceled procedures on April 2, 2012, to get me into her office (she originally scheduled me for July). Suddenly, her office called and told me to be there the same day.

I had avoided having a colonoscopy my whole life but knew I was having a serious problem and kept letting it go. It was getting so painful I made an appointment with another doctor in late March who did a colonoscopy, but didn’t biopsy a 7 cm tumor.

Somehow, the doctor who diagnosed me saw the digital printout and had her office call to rush me in.

The reports were beyond shocking. She said this type of cancer, high-grade neuroendocrine small cell carcinoma of anus and rectum, was so rare there was no data on it.

The doctor moved like a fiery wind to get nuclear studies and body scans. She also suggested gruesome surgery, but I insisted on getting a second opinion. I ended up having another consultation with a fabulous doctor: a radiation oncologist specializing in the type of cancer I was fighting.

How are you today?

After an agonizing battle, prayer and intense chemo and radiation, here I am today.

There is so much to the story, but I will finish with the words from the doctor that so kindly canceled her procedures that infamous day. During a follow-up exam, she told me, “You are an unprecedented miracle. This is out of the box: there is no evidence of the tumor or all the massive treatment!” She was actually weeping and grinning at the same time. We hugged and cried together.

This March, what is one thing you want the world to know about colorectal cancer?

First, of course, get a colonoscopy. It is really not a big deal, but be sure to find a good doctor.

Mainly, the world should know that with God all things are possible. People can make it and there is always hope. I had two to four months to live and no one has ever survived this! People can make it; sometimes it is a combination of treatment, a lot of prayer and speaking the word into our bodies.

What advice would you give someone who's just been diagnosed?

Please be sure you get at least one other opinion and find a doctor you can trust who is familiar with your type of challenge. It is important to get another consult. Even though I was given no time, I pressed through to get another opinion. If I hadn’t I wouldn’t be alive and would have had massive surgery, which I never had.

Is there anything else you would like to add?

People's love and compassion are healing. I strongly suggest you be cautious and guard your heart and mind. Well-meaning friends and family have many opinions, but that is not what one needs in a battle for their life. I graciously had to choose not to speak to people that were opinionated and upsetting—there’s no energy to do that when you’re in treatment and pain. Ask God to choose those in the medical field that are best for you and the friends that will be there for you and can speak life and love, or not speak at all sometimes. Stay uncontaminated—this is how I walked out of this event.

I have also written a book to encourage others titled “Plummet to the Pinnacle.”

Friends, you are not alone on this path. May you be comforted along the way and have peace even in the midst of a battle.