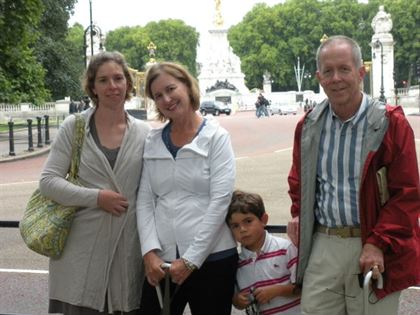 I have been blessed to have known Gordon Cole for 10 years and to call him my friend.

We lost a true advocate and friend on September 26, 2014. There are no words to adequately express our sadness at the loss of Gordon, and it's hard to say goodbye to a gentleman who was a friend to all who were lucky enough to have their paths cross with his.

Gordon's journey began a decade ago, and even from the beginning, his motto was always "never give up hope."  Despite the many ups and downs, he did exactly that - he never lost hope.

While he was in treatment to keep his cancer stable, he worked tirelessly to research new treatment options not only for himself but also for his friends who were also in treatment.  His heart was always to help others who were sharing this journey with him.

He was never too busy to want to hear about your life, your problems and challenges. I am forever grateful to have had him to share those times with. He truly cared about me and my family. He was also a devoted volunteer who never said no to calling a newly diagnosed patient to share his story, his knowledge or to spread his message of hope. He raised money through his foundation "Golfers Against Cancer" and helped fund many of our patient support programs, including our Blue Note Fund and past scholarship awards for our conferences.

He developed close friendships with our staff members as well as many of our volunteers. Two people he became especially close with over the years were Anita Mitchell and John Lloyd. They share their sadness as they remember Gordon.....

Anita
Anita met Gordon six weeks after her liver surgery at our national conference nine years ago. Within minutes, they realized they’d had liver surgery a month apart. A friendship grew over the years as they would call each other when each had scans – good news or bad, it didn't matter. Gordon was the one she called when she found lung mets.  Gordon assured her that his grew slowly and she soaked up all his words of wisdom and hope. Together, they would research treatment options and talk about what stage IV patients needed to have to live better with this disease. Gordon's input, as well as many other stage IV survivors, inspired the Colon Cancer Alliance to focus on stage IV survivorship issues at our upcoming Summit this December.

Upon hearing of Gordon's death, Anita said "I don't know why I am still here and he is not.  I just pray I can help people the way he has helped me."

John
John met Gordon more than five years ago. They were both active on the North Carolina Advisory Committee on Cancer Coordination and Control while writing the state cancer plan and spent hours talking about bridging the medical and political challenges.  John expressed how much he loved his friendship and collaborating with him on creative treatment strategies.  No one was more devoted to the cause than Gordon. John described him as proof that a colon cancer diagnosis could be managed.

John said, "My life would be much poorer without the years of friendship I had with Gordon."

No truer words were spoken. We are all better people for knowing Gordon Cole.

We Will Continue in His Memory
We will continue to honor his memory every day through our programs which create awareness, fund new research and support those who are living with colon cancer.  We will never forget Mr. Gordon Cole.

"Those we love remain with us for love itself lives on, and cherished memories never fade because a loved one's gone. Those we love can never be more than a thought apart, for as long as there is memory, they'll live on in the heart." - Mary Alice Ramish