Hero of the Month: Team Britton 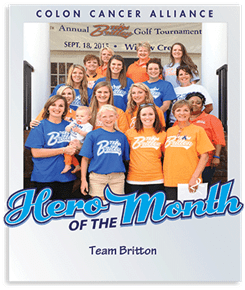 Britton Butler may have only been 22 years old when doctors diagnosed him with colon cancer, but he didn’t let that stop him from giving back. In an effort to help less fortunate patients undergoing treatment, he organized a tournament for one of his favorite sports: golf. Unfortunately, Britton never got to see his dream realized, as he passed away just three months before the first tournament.

His family and friends, lovingly known as Team Britton, took up the torch and made sure Britton’s dream came true. Now in its fifth year, the Annual Team Britton Golf Tournament has raised more than $30,000 to support patients through our Blue Hope Financial Assistance program. We got a chance to speak with Britton’s mother Debbie and Stanley, who heads the organization, about Britton’s legacy, the annual tournament and more!

Can you tell us a little about Britton?

Debbie: Britton was a kind-hearted, selfless person who always made sure everybody else was ok before he thought of himself. You couldn’t miss Britton in a room full of people, and that’s not just because he was tall—he had this energy and a contagious, charismatic personality. He was friendly and outgoing, but if you challenged him to anything, whether that be a game of Go Fish or a basketball game, be prepared to work, because Britton was the most competitive person I’ve ever met!

I always admired one thing about Britton: he never let cancer define him. He wanted to continue to live his life the way he had before he got sick. He never wanted pity and never wanted to be the center of attention.

How did the Team Britton Golf Tournament start?

Debbie: Britton envisioned a way to help people who were less fortunate than he was. He always left treatment concerned for someone who struggled to make ends meet. Britton also had a deep passion for the University of Tennessee football team—he would schedule his chemo around their games. There’s something about cheering on the Vols with 102,450 other fans and he wanted to make sure kids who would not otherwise have the opportunity to experience a football game got the chance to go.

With these ideas in mind, Britton decided to have a golf tournament to raise money for colon cancer patients in need, as well as children in the community to attend a Tennessee football game. Unfortunately, Britton tragically passed away on February 18, 2012, before the May 24 golf tournament. Britton’s family and friends decided to carry out his vision and planned the first tournament in less than three months. You could definitely feel Britton’s spirit that day, and the tournament was such a success that we’re now in our fifth year.

Your golf tournament has raised more than $30,000 for our Blue Hope Financial Assistance program! How does it feel to have such an impact on those needing financial support?

Debbie: Britton always wondered how people were going to pay their bills or buy groceries because the medical bills were expensive. He would be so excited to know that our golf tournament, which started out as just a vision, has had an impact on others. It’s humbling, but also very emotional, to think that a golf tournament named in Britton’s honor and memory is reaching out in ways he would have never imaged.

Stanley: The Team Britton impact is beyond words for me. It’s not just the financial support, but also how the event brings people together. Last year, a woman donated some items from her antique store to our silent auction. I invited her to have lunch with us at the golf course (she did this as a favor to me since she had been a long family friend of mine). Little did I know, she was Britton’s late grandmother’s best friend! When she came and saw all of Britton's aunts, a number of hugs, tears and emotions was overwhelming. Being able to bring them together made me so proud. I love going to out-of-town soccer tournaments with my daughter and seeing a group of high school kids wearing our Team Britton tee shirts in the hotel lobby. If you ask me what it takes to have a successful event, I’d say that's it: have people that are caring and passionate about the work you’re doing.

What advice would you give someone who’s interesting in getting involved to honor a loved one?

Stanley: Get a group of people together and find out what gift each person has to bring. For some, it might be fundraising, organizing or networking. For me, having a great group of volunteers is the key. The event will be a success when your volunteers can embrace the same passion you have.

Debbie: If you have an idea—just go with it. In the beginning, especially after Britton passed away, we thought about canceling the golf tournament. Everybody was mourning his loss and the thought of planning a successful tournament was the last thing anybody had in mind. However, when it came time to call the golf course to cancel, I think everybody thought about Britton’s selflessness and how he was probably looking down telling us to quit crying and get to work! He wanted nothing more than to help others, and if that is what he wanted that is what we tried to do. Nobody expected the turn out we had the first year and every year after that. None of us had any experience in planning any sort of event—let alone a golf tournament!

Is there anything else you want people to know?

Debbie: The most important thing for us to do at the golf tournament is to educate everybody on early detection. Britton might still be here today if his colon cancer had been caught earlier. Colon cancer is often thought of as an old person’s sickness. When people hear Britton was diagnosed at age 22, they are shocked by his age. However, colon cancer can happen to anybody regardless of age. Colon Cancer can be an embarrassing thing to talk about, but the more people are aware the better. Know your body and don’t be afraid or embarrassed to bring it up to your doctor. Colon cancer is highly treatable when it’s caught early.

The 5th Annual Team Britton Golf Tournament will be held on May 19 in Knoxville, Tennessee. Register or donate at www.teambritton.com!