Hero of the Month: Jay Nadas 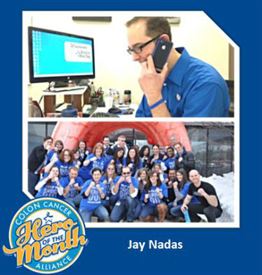 In 2009, Jay Nadas lost his best friend, Rob Nelson, to colon cancer after being diagnosed at the young age of 32. Since then, he’s made it his mission to get colon cancer on the map in a big way. Through his employer, Walgreens, he’s worked tirelessly to amplify education about the disease on their corporate campus and has big plans for the future. We’re both humbled and inspired by the work Jay has done. For all he has accomplished and his future plans to knock out colon cancer, we are proud to honor Jay our April Hero of the Month.

"It is an older picture of Rob, but it is my favorite. It's how I remember him."[/caption]

Rob was an inspiration throughout his life, and it continued during his stage IV diagnosis and treatment as he was very graceful throughout the progression of his cancer. “Graceful” is how Kim, his wife, described his demeanor, but there could not be a better word. He was not concerned with his condition and wouldn’t let others treat him like he was sick. Instead he focused on what was important in what little time he knew he had remaining. He got married and spent much of his time with his family. He took trips and enjoyed a full lifetime of different experiences. In December 2009, he beat cancer with the one sure way and passed away peacefully in his home. True to his nature, I’m convinced he waited for everyone to have a chance to say goodbye before he allowed himself to pass on. I, myself, was able to thank him just a few short hours before he died for being my friend, my brother, my father, my confidante, my guide and so many other things.

Why did you decide to get involved?

As a pharmacist, I learned the basics around colon cancer during my education, but it wasn’t until Rob’s diagnosis that it changed my life. I struggled over the few years that followed his passing, knowing that Rob had been experiencing symptoms for a long time but he didn’t even share these experiences with me, a health care professional and his best friend. We shared so many things in confidence in our lives, but this one thing didn’t even come to mind. A couple of years after his death, I learned that colon cancer had touched my life in other areas – affecting many of my own family members and close family members of my friends – and people didn’t talk about how they died. They spoke of cancer but the “colon” was dropped for whatever reason. It was at that time I decided I was going to remember Rob and continue his inspiring nature by helping make colon cancer discussion more commonplace and by helping identify people early enough so they have a better chance.

Why with the Colon Cancer Alliance?

Once I knew I wanted to be active in this space, I did some online research and came across the Colon Cancer Alliance. I sent an email with a general question about how I could get involved, and before I knew it, Nicole Sheahan and I were on the phone, brainstorming about where I could make an impact and how Walgreens could play a role. One year later, we saw the results of our discussion come to fruition in Walgreens first-ever Dress in Blue Day event.

Tell us about the event!

The concept of Dress in Blue Day and informing people about their colon cancer risk aligned very well with my goals and Walgreens’ mission to provide greater access to preventive health services. With that in mind, I focused the basics of Dress in Blue Day at the Walgreens corporate campus on spreading awareness and capturing people’s attention about how this might affect them.

We had the giant inflatable colon, a live band – blues of course – and several activities to attract people’s attention, like a photo booth with fun props and other booths where people could “spin to win” or guess how many pieces of blue candy were in the jar. With each interaction, our Blue Crew volunteers were focused on capitalizing on people’s attention – meaning, as we were handing someone a prize or a freebie or a snack, we would not let go of the item until we shared one fact about colon cancer. After we shared the fact, we asked people to pass it on to other folks or to act upon the information; i.e., get screened or talk to someone else about getting screened.

When they agreed to do so, we asked them to sign our pledge board. We also had a great panel of speakers made up of employee survivors and family members of those who lost their battle with colon cancer. Our guest speakers included Jonny Imerman from Imerman’s Angels, and Nicole Sheahan from the Colon Cancer Alliance, who closed out the event with a wonderful call to action: spread the word that colon cancer is “preventable, treatable and beatable.” All in all it was a great event with a strong turnout, as we had more than 500 people sign our pledge board and were able to raise $6,000+ for the Colon Cancer Alliance.

What would you like to see happen in the colon cancer space in the future?

My mission is to make sure people know the facts about this disease – focused on the primary fact that people do not need to suffer from this disease; it is 90% treatable if caught in early stages and yet only 40% of people are diagnosed in this stage. There is discussion about 140,000 people who are diagnosed annually with colon cancer. I’d like to see the number of people who get screened each year grow, which can lead to more people being diagnosed in the early stages of the disease or not at all. With newer innovation in this space, like the Fecal Immunochemical Test, there are fewer barriers for people to become aware of their risk. I’d like to see everyone have colon cancer become part of their vocabulary, and everyone knowing what options are available to them and within their reach: affordable, accessible and understandable.

How do you plan to be involved moving forward?

My plan started with Dress in Blue Day but will continue internally and externally with Walgreens. With the momentum from this March, I am working to incorporate our 8,000+ Walgreens locations in 2015 and encouraging support of the Undy 5000 5K throughout the country. Externally, I will continue to spread the word: I helped a couple of smaller companies host their own Dress in Blue Day this March, and I plan to continue on as a business to business ambassador of the cause.

Why is it important for others to help share the message?

It’s amazing when you start talking about colon cancer to the world. It has touched so many people in one way or another; family members, friends or their own experiences. People seem to be looking for ways to get involved, almost as if they are waiting for someone to talk to them about it. And yet, the knowledge gap still exists: second largest cancer killer but 90% treatable when caught early and largely preventable if screening recommendations are followed. These are powerful facts and if more people are sharing this message, more people will know and more lives can be saved. I know we can make this possible because I have seen it! When there are people who care and they are not afraid to share - more can become aware!

Check out more pics from the Walgreens Dress in Blue Day event!