Hero of the Month: Dominic DiFede 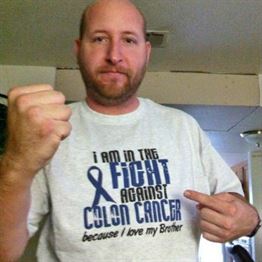 Dominic DiFede was shocked when his oldest brother, Robert, was diagnosed with stage IV colon cancer at the young age of 39. Over the next two years, Robert underwent multiple surgeries to remove parts of his colon and rounds of chemotherapy to combat the disease. Despite aggressive treatment, within a year the cancer had spread to his lungs. With Robert’s cancer now classified as terminal, Dominic began frantically searching for information about the disease that was killing his brother.

What he found was alarming: although colon cancer is largely preventable, it is still the second leading cause of cancer death in the United States. Why hadn’t he heard about a disease so prevalent and deadly? More than anything else, Dominic was looking for a source of support and a way to show his brother that he was not alone in this fight.

Less than three years after his original diagnosis, Robert was told continuing treatment would only slow the growth of his cancer for three to four months. Robert made the difficult decision to stop chemotherapy, and after a short month, Dominic lost his older brother on November 17, 2008. Robert was only 42.

Dominic has chosen to grieve by educating others about colon cancer and doing everything he can to raise awareness. In 2012, the Undy 5000 5K landed in Sacramento. Unable to attend, he spent the next year training for the 2013 event. Despite chronic back pain, Dominic finished his first 5K in memory of his brother, getting people in the local community talking about this disease.

“When my brother died, I felt as if he and my family were alone in our battle against colon cancer,” says Dominic.  “Events like the Undy 5000 allow us to meet people who have been in the same place or people who are new to the cause but want to offer support. As each person crosses the finish line, remember this: no matter how colon cancer has impacted you, on the day of the Undy 5000, you feel like you won!”

Dominic continued putting colon cancer on the map and igniting conversations last March, during Colon Cancer Awareness Month, when he won first place in our 2013 Dress in Blue Day photo contest. This March, Dominic will once again fuse his education and fundraising efforts by decking himself out and hitting the streets at the Sacramento Undy 5000. Together, we’re knocking colon cancer out of the top three cancer killers. Join us this March!

Learn how you can get involved at coloncancermonth.org.