Hero of the Month: Deborah Biggerstaff 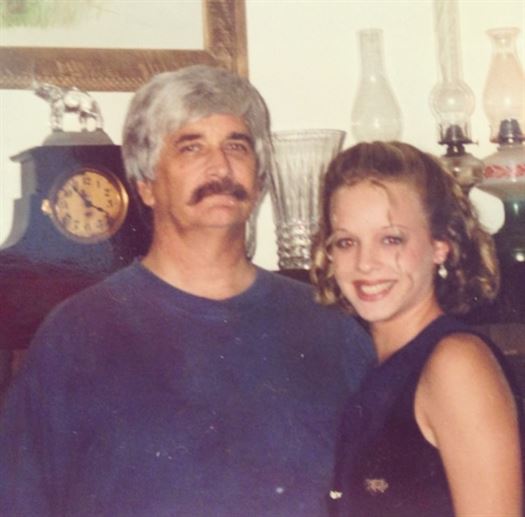 Deborah lost her father to colon cancer just one month after her first child was born. Since that time, she has been an avid supporter of the Colon Cancer Alliance, and 2017 marks her fourth year as a Dress in Blue Day supporter and fundraiser. Currently, she is the top fundraiser for Dress in Blue Day. Read more about her incredible story to see how you can help make a difference this March.

What is your connection to colon cancer? My dad was diagnosed with colon cancer at 53 years old. I was just 14, and he was my best friend. They could not pinpoint what type of cancer he had, but knew that it was rare and it was aggressive. Eventually the doctors had to remove his entire colon, and he was forced to start using a colostomy bag. The cancer came back a few years later and had spread to other parts of his body. He didn’t tell me it was back because I was pregnant with my first child, and he didn’t want to add additional stress to my hectic life. Unfortunately the prognosis was terminal, but my father only wanted two things before he passed: to see me get married and to see his grandchild be born. Not only did he see me get married, but on Christmas Day my first daughter was born. He was able to hold her in his arms and be with her for the first month of her life. On January 26, 2003, he passed away. After that, I went through an incredibly difficult time. Losing my father, who was also my best friend, while being a new mom and having my husband in the military was simply becoming too much and I began feeling depressed. One day I finally decided that I was not going to mourn anymore. I decided I was going to celebrate his life and ask everyone that I met "What do you know about colon cancer?" This energy eventually led to my participation in the University of Mississippi's Medical Center task force, where we recently created the nation's first Colon Cancer Awareness License Plate for the 70x2020 Colorectal Cancer Screening Initiative. The campaign's goal is to have 70% of eligible Mississippians screened by 2020.

What made you get involved with Dress in Blue Day the first year? I believe I was doing basic research, and stumbled upon the Colon Cancer Alliance website, and was also talking to a handful of people about colon cancer in general. Everything just sort of spiraled from there. I even remember four years ago, when I moved to Jackson, Mississippi for my husband's new job, I immediately wanted to get the local town involved. Each year since we've moved I have successfully gotten the mayor to proclaim March as Colon Cancer Awareness Month. That's something I will always be proud of. What keeps you coming back each year? To put it simply, it's the people that work at the Colon Cancer Alliance. If you have a question or need anything, they are there for you 100%. Just last week I tweeted about my Dress in Blue Day fundraiser and within five minutes the Colon Cancer Alliance had liked it. Around the holidays, I got a holiday card thanking me for being part of the team. There is a genuine willingness within the Colon Cancer Alliance community to go the extra mile, and to take that extra step. They make sure you feel like you matter, because you do. And that is what people want the most. They want to know what they are doing matters. The little things go a long way. The mission of the Colon Cancer Alliance and what the funds are being used for is of the utmost importance. $5 donations matter just as much as $500 donations. No donation is too small. How do you feel Dress in Blue Day makes a difference in raising awareness? I realized when I started my first Dress in Blue Day that “this isn’t too big, I can do this.” It started initially with the fundraising, and each year I've added in little things to keep it fun. I absolutely had to be persistent to keep the energy up. I create a new Dress in Blue Day Album every year on Facebook, and each year I’ve had co-workers or friends wear blue, and if they don’t live nearby they’ll email me the picture of themselves wearing blue. Each year it's gotten bigger and bigger, and I even have had strangers send in pictures of themselves going blue - too cool! Raising awareness for this disease has even helped two of my dear friends get screened. One friend told me, “If it wasn’t for you always talking about colon cancer, I would have ignored it - and who knows how long I would have let my symptoms continue.” She was referring to the polyps they found when doing her colonoscopy. That’s what raising awareness for Dress in Blue Day is all about. If we can save one life, or help one more person get screened, then we’ve done our jobs. I can’t think of a better use of my time than to talk to people about colon cancer. I don’t want anyone to have to bury a parent before their time. Are there creative, new ideas you've tested over the years that you've done this? Last year we were raising awareness for our 70x2020 campaign and had the giant inflatable colon - it was such a hit. That day we were getting people to sign up for the license plates, handing out pamphlets, and spreading the word. Even my sweet daughter learned facts about colon cancer just by reading the signs inside the colon. I also think the merchandise available in Colon Cancer Alliance's store is fun, affordable, and something for everyone. When I shop through Colon Cancer Alliance I know my purchases are making a difference. I’ll never quit doing Dress in Blue Day because there is so much good that comes out of it. Do you have any suggestions for first time team fundraisers? My biggest piece of advice to a new fundraiser is persistence. If you have a Twitter account, tweet a link. If you have a Facebook account, put it on your Facebook page. Make sure to include a little story on your TeamRaiser page about why you are so passionate about this cause. Make sure people know why you are doing this - what makes it so personal to you? The thing about colon cancer is it could happen to you. I sure hope it doesn’t, but it can. So what can you do to help: Are you able to donate? Can you share? Can you wear blue...it’s so easy! I’ve found I had more success when I branch out and ask others for help. People want to feel useful and that they contributed to something. And try to create an incentive, like a little thank you that they can carry around with them and say “Hey, I did something.” It’s like The Beatles said: “I get by with a little help from my friends.” You can’t do it without their help and without your persistence. I'm only 35, and I realize that this disease could happen to me. I know that I don't want my kids to have to watch me be sick. If we can eliminate this disease, or knock it on its a**, then let's do it. We need to keep opening the dialogue and normalizing it: let’s talk about it. I hope at least one person takes that to heart, that when something isn't right that they are going to get it checked out. Knowing that you matter confirms my decision that this is the organization I want to fundraise for. I will always be their biggest cheerleader because I know they they are making a significant impact.