Hero of the Month: Dan Foster 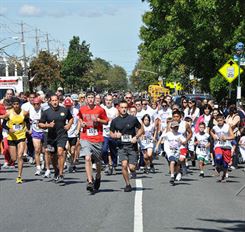 Our Hero of the Month features inspiring individuals who are going above and beyond in the fight against colon cancer. This month we’re honoring Dan Foster, a 17-year stage IV colon cancer survivor and CCA Buddy who’s been all over New York (and the country!) getting involved. From fundraisers and speaker’s bureaus to sharing his story at health fairs and conferences and starting his very own 5K event, Dan’s been giving hope and heart to others who’ve been in his shoes since 1996.

You started you own 5K? Tell us more!

September 14, 2013 marks the 11th Annual Dan Foster 5K Fun Run/Walk. What started out as 40 people has now grown to 200-300. Can you believe that? Eleven years ago, I decided I wanted to start a walk in my neighborhood. The initial idea was to create a way for people to have fun while learning about the importance of screening and early detection. From there, local businesses started coming out of the woodwork to help sponsor trophies, t-shirts and donate food and raffle prizes.

Each year the event is in memory of two community members who have fought colon cancer, and the families decide who the benefiting cancer agency should be. Last year, on the event’s 10th anniversary, we donated $15,000+ to Beth Israel Hospital, where I had my surgery. The hospital created the ‘Dan's Colorectal Cancer Research Fund’ in my honor. And what an honor it was.

You’ve been involved with so much. What is one of your greatest memories?

I’ve had the opportunity to start many exciting initiatives over the years, but I need to mention the Walk of Hope, a 120-mile walk I started in 1999, stretching from the tip of Long Island, NY to Saint Patrick’s Cathedral in Manhattan. I wanted to give something back, so I set off on National Cancer Survivors Day and walked for seven days, raising $20,000, which I donated to the Circle of Hope Cancer Foundation and Beth Israel Medical Center. The support I saw from the community before, during and after the walk was overwhelming.

A few months later, I found out that my cancer had spread to both lungs. It was time for surgery and eight months of chemo. I was planning on doing the walk the next year, but since I had just finished treatment, a group of 45 people from my work split the route and walked those 120+ miles in my honor. That was a ‘WOW’ moment.

What have you gotten out of your years of volunteering?

I have always been an avid volunteer, but volunteering for CCA and other cancer organizations is totally different. CCA’s Buddy Program helps those going through colon cancer, and their families, too.  When I talk to someone going through treatment, it comforts them to know I have been through the same thing, and I offer any helpful pointers I can. I had a co-worker whose wife was diagnosed with colon cancer and she didn't want to have the surgery. When she was ready, she gave me a call and we talked. Her husband called later and told me that after our conversation, she later wound up having the surgery. Now she’s doing well. It's hard to explain the feeling you get by helping someone like this, but it really made me feel good to give her a little extra support in a time of need.

As a 17-year stage IV survivor, what’s your advice for those currently fighting the fight?

Take one day at a time. If yesterday was a bad day, there is nothing you can do to change that. Don't think about tomorrow because it's not here yet. Just concentrate on today. If you’re having a hard day, do something you enjoy, or imagine you are. I loved to fish, so I made believe I hooked into a big fish and it helped. And remember: there will always be hope.

Learn more about how you can incite change in your community at our upcoming National Conference: Empower You. Impact Your Community.