Hero of the Month: Anne Bergersen 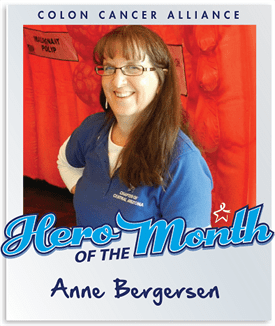 From spreading awareness at health fairs to planning Phoenix Undy Run/Walks, Anne Bergersen has been dedicated to our Central Arizona Chapter from the very beginning. As a colon cancer survivor, she doesn’t hesitate to share her story or a few encouraging words; as a dedicated volunteer, she’s willing to do what it takes to give back to the community. The former Chapter Chair may have recently stepped down, but her legacy in the chapter lives on. That’s why we’re excited to honor her as our Hero of the Month.

Right now my husband and I are empty nesters: our daughter recently graduated from the University of Arizona and our son is in school in Florida. My husband and I were college sweethearts and we just celebrated our 25th anniversary!

Can you share the history of the Arizona Chapter and how you got involved?

I was diagnosed with stage III colon cancer when I was 41 years old. There were no local support groups while I was going through everything, so I turned to online support. Several years later, I was laid off, job searching and looking for ways to get involved in the community—then I found the Colon Cancer Alliance in 2007 as they were starting to form a chapter in Arizona. The Colon Cancer Alliance was also looking to start the Undy Run/Walk around that time and Phoenix was one of the first cities to hold an event.

We officially became a chapter in 2009. I started as Treasurer and Secretary, then Chapter Chair and Undy Run/Walk Chair.

What’s the story behind Nolan the Colon?

The Undy Director suggested we buy a giant inflatable colon, so he let us borrow one for an event. We shipped it back after our event, but it was so amazing we wanted to use it again! We decided we had to buy one. It was delivered and the next day we were called by a news station to use it as a prop, so Nolan made a television appearance within the first week of being in the chapter!

It was a pivotal point in the chapter; before we had him, we were always asking people if we could come to their events. Then we got Nolan and people started calling us! If it wasn’t for Nolan, we wouldn’t be making the impact we’re making now. He recently went bilingual, so now he has Spanish banners and he also has his own Facebook page!

You put in a lot of time with the chapter. What kept you going when you were feeling tired or overwhelmed?

I wasn’t working and my kids were getting older, so I put my whole heart and soul into the chapter. When I was first diagnosed, I felt alone and naive about colon cancer, but when I got over my fear of speaking, I wanted to tell my story. That’s what kept me going—not wanting other people to go through what I was going through. With each year of being cancer free, I wanted to be that voice of hope for people who were recently diagnosed. Also, with each passing death of chapter members, I wanted to keep going to follow in their footsteps and carry on their messages.

What was your favorite moment in the chapter?

I love when you go to an event and you know you’ve made a connection with someone. When you tell your story and encourage someone to get screened, it may help save their life. I met one man at a recent event who was African American and over 50, but he never had a colonoscopy. He started asking me questions, so I gave him an informational flyer. Then he called his doctor that day to schedule a screening—I actually got to see the impact we make immediately. That was a nice way to end my time in the chapter.

What advice do you have for patients and survivors who want to get involved in the community?

Learn as much as you can about your disease and find a support group you’re comfortable with, whether it’s face to face or online. Then, find what’s meaningful to you and use that to give back. Ask yourself, “How did I get through it?” and give back that way. For me it was hearing inspirational stories, so I wanted to share my story to inspire others.

Don’t forget, the Colon Cancer Alliance serves as a source of information and support. If you have additional questions about colon cancer or are in need of support, please contact our free Helpline at (877) 422-2030. We’re here to help.