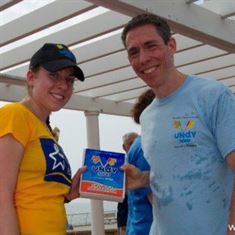 That morning, Undy 5000 participants (and the sun!) were out in full force in Long Branch, New Jersey; nothing was stopping these folks from carrying on with the event, which has become a yearly tradition on the Jersey Shore. With wide smiles and colorful undies galore, Long Branch welcomed the Undy 5000 back with open arms.

Although the circumstances of the storm called for a diverted race route this year, more than 500 participants came together to honor loved ones, raise funds and celebrate life over five kilometers of Undy 5000 fun. Despite the fact that many in the area are still recovering from the storm that tore apart homes, communities and the emblematic boardwalk, the Jersey Shore community rallied to overcome the literal roadblocks these nine months presented to make sure the Undy 5000 was still a success.

At this year’s event, nearly 30 survivors were honored during the survivor ceremony, including Greg Landes, a stage III colon cancer survivor. Greg proved to be a triple threat this year; not only did he speak at the ceremony, he was also the second place fundraiser and finished as our fastest male survivor. To say he was an Undy 5000 all-star is a stark understatement.

After battling back from a stage III colon cancer diagnosis in June 2010, Greg knows what it means to be a fighter in every sense of the word. On July 20, he saw this same fight in Jersey Shore Undy 5000 participants.

“I think the fact that many of the New Jersey communities hit hardest by Sandy are coming back strong is evidence of everyone's strength and resilience,” Greg said.

Despite all the work still left to fully recover from Hurricane Sandy, we had an emotional reunion with the Garden State and the inspirational participants who, with dedication and determination, raised more than $60,000 and made sure nothing prevented the Undy 5000’s successful return to New Jersey.