Portland’s DJ O.G. One shines a light on colorectal cancer’s impact in the African American community 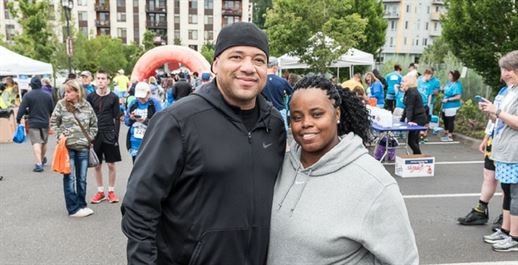 Although Jackson wasn’t experiencing any symptoms related to colorectal cancer and was leading an active lifestyle, in part by mentoring kids in the Portland community, his physician recommended a colonoscopy because he was approaching the standard screening age of 50.

“When I was informed of my diagnosis I was numb,” said Jackson. “I didn’t know what to feel, but I knew it was serious.”

Jackson immediately took action undergoing a combination of radiation, chemotherapy, and several surgeries. As a result, his life changed drastically. He wasn’t able to work or be as active in the community to due to complications from treatments.

“I went through the challenges of being depressed and evaluating where my life would go from that point on,” said Jackson. “Fortunately, with a lot of prayer, my amazing wife, and an outpouring of community support, I gained new perspectives and continued the fight. I’m glad to say that I’m now cancer-free.”

One of the ways Jackson spreads awareness is by participating in the annual Portland Undy RunWalk. The family-friendly 5K is organized by the Colorectal Cancer Alliance and supports its mission to end colorectal cancer within our lifetime by providing support services, awareness of preventive measures, and funding critical research.

“I run in the Undy to raise awareness of colorectal cancer within the African American community,” said Jackson. “It’s silently killing us. I wasn’t sick when I was diagnosed with stage III colorectal cancer. I want to peel away the misperceptions and save lives.”

“To those questioning whether they should get screened, don’t let fear of the unknown or unfamiliar put your life at risk—get screened.  For those going through the process, allow yourself the space to be vulnerable and accept help,” said Jackson.

Join Jackson and other survivors at the Portland Undy RunWalk on June 16. Register at undyrunwalk.org.