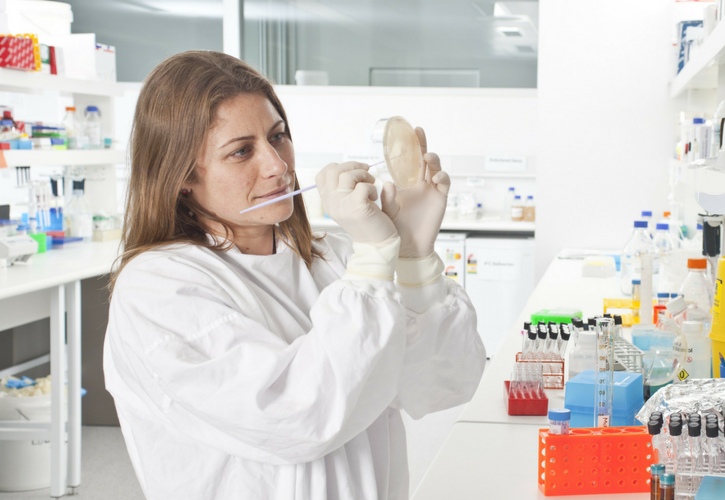 A Cedars-Sinai researcher capitalizes on a $150,000 grant from the Colorectal Cancer Alliance to expand her work and win a five-year, $3.4 million research grant from the National Institutes of Health, advancing science that could form the foundation of a new blood-based colorectal cancer screening test.

From her own lab at Cedars-Sinai Medical Center in Los Angeles, researcher Dr. Megan Hitchins is answering questions that could prove pivotal in developing a new screening test for colorectal cancer in people under age 50. And if her long-term vision is completely realized, this research could help detect colorectal cancer earlier in some of the youngest cases.

But success in research takes time and funding. The former is natural, but funding often requires a committed partner who believes in a researcher’s work. In 2019, the Colorectal Cancer Alliance awarded Dr. Hitchins $150,000 to determine if blood-based tests for colorectal cancer could accurately detect the disease in people under age 50.

Dr. Hitchins has spent her career studying the genetic and epigenetic (environmentally caused) changes behind disease. Completing her Ph.D. in clinical genetics at University College London and amassing an impressive body of research before turning to the Alliance, the associate professor at Cedars-Sinai’s Center for Bioinformatics and Functional Genomics was well suited to answer the Alliance’s important question.

Even with pandemic-related setbacks, Dr. Hitchins has made remarkable progress toward her goal, with a final report expected in coming months. She and her team have parlayed advancements made with the Alliance’s research grant — funding raised with the generosity of our donors and supporters — into a transformative five-year, $3.4 million R01 research grant from the National Institutes of Health.

“People think that their money won’t go very far when it comes to medical research because it’s so expensive,” Dr. Hitchins said. “But this is one case in point that a particular sum of money does go a long way. The Alliance’s funding made us competitive for the grant we now have.”

Whether Dr. Hitchins’ research will ultimately produce a new screening test remains to be seen, but the progress made toward it so far has relied greatly on the Alliance’s support.

“I would say the funding was absolutely critical,” Dr. Hitchins said. “One of the major scoring factors for obtaining federal funding of most types is to have preliminary results that show you’re already on track. The Chris4Life grant from the Alliance provided the funds to get that preliminary data up to a point where the NIH panel believed it.”

When it comes to colorectal cancer screening, the colonoscopy reigns supreme. A visual look at the colon, increasingly backed up with computer-aided detection, and the ability for doctors to remove polyps (tissue growths that can turn into cancer) in one go is difficult to beat.

That’s why positive results from other types of tests, including FIT (fecal immunochemical test) and stool DNA, require a follow-up colonoscopy. A positive stool-based test — indicating the presence of blood in stool — can occur for a number of reasons, not just cancer. Doctors need an up-close look at the colon to make a diagnosis.

But these less-invasive screening tests are a fine way to get checked regularly, as often as every year, if a person can’t or won’t get a colonoscopy screening. Some tests can even be completed at home.

“The more people who get tested by any means available, the better,” Dr. Hitchins said.

About a third of eligible adults are not getting screened for colorectal cancer. It’s believed that a wider variety of approved tests could inspire more screening, which would save more lives. Screening is the No. 1 way to prevent colorectal cancer.

The Alliance is currently partnered with Freenome, which is now recruiting clinical trial participants for its blood-based test.

The one blood-based test on the market today, Epi proColon, is designed to detect the mSEPT9 biomarker in people age 50 and above only. According to Dr. Hitchins and previously published research, it’s successful in doing so about 72 percent of the time.

“The mSEPT9 is a really good biomarker for what the FDA has approved it to do, [detection] at age 50 and above,” Dr. Hitchins said. “Now that screening is recommended for people ages 45 and up, it does appear that the test needs boosting with additional markers. So we’re aiming to fill that gap.”

Not every tumor is created equal. Each has individual features that can, for example, make it more or less aggressive, more or less responsive to treatment, and more or less detectable with a particular blood-based test.

Features like these can be identified with a growing array of biomarker testing. To test a patient’s biomarkers, either a tumor sample (tissue biopsy) or blood sample (liquid biopsy) is collected and analyzed.

Dr. Hitchins is focused on colorectal cancer detection through blood samples, and specifically, the age at which a blood-based test can be successful.

It would be reasonable to conclude that if a test can detect colorectal cancer in an older person, the same test could detect it in a younger person. But that’s not the case. The detection divide seems to occur somewhere around 50 years old, Hitchins said.

“One issue with the mSEPT9 test is it’s only looking at one biomarker, and if your particular tumor is not producing that biomarker, we’re not going to find it in the blood,” Dr. Hitchins said. “If the younger patients’ tumors are different, you’ll never detect it, whether it’s in an early stage or late stage. We need a blood test to incorporate a panel of biomarkers, more biomarkers, to pick up the presence of the tumor in the blood tests.”

Simply put, testing for more biomarkers means you’ll find more cancers. With four or five major subtypes of colorectal cancer in existence, the aim is to create a test with biomarkers that can detect each one of those types. But reality adds complications. Adding more biomarkers to a screening test also increases its price — and no one likes a cost-prohibitive screening test.

“We used deep methylation sequencing of a large number of early stage tumors, those being CRC of stages I and II, to get these biomarkers,” said Dr. Hitchins, describing a deeper and broader method for identifying biomarkers than previous studies used. “We wanted to find the biomarkers that cropped up early, as the cancer takes hold.”

To confront the cost issue, Dr. Hitchins seeks to identify the right combination of biomarkers to catch the most cancers, while also keeping any potential screening test affordable.

“If you imagine you’re going to have potentially millions of people opting for that test, it needs to be cheap  — under 150 dollars,” Dr. Hitchins said. “What we’re trying to do is figure out which of our multiple biomarkers should actually make it into a final test, which biomarkers are complementary.”

Recent studies suggest that current young-onset colorectal cancers may be biologically different from colorectal cancers in older people. This possibility is critically important to Dr. Hitchins, as much of her biomarker research up until now has been grounded in early-stage tumors from people over 50 years old — samples that are easier to come by in biobanks, for example.

She and her team have been presciently collecting samples from “contemporary colorectal cancer cases” over the last five years as they presented themselves in colonoscopy clinics. With the NIH money flowing, Dr. Hitchins will train her research exclusively on patients under 50 — and validate all of the research she’s done before on tumors from these younger patients.\

“The recent rapid increase in the prevalence of CRC among young people might be because of something new, a more recent exposure, or change in lifestyle or diet, since the last generation,” Dr. Hitchins said. “[Older cancers] may look different than what people are developing nowadays. The NIH funding will let us repeat everything we’ve done before, but with lessons learned we know we can do it much much faster this time around.”

This rinse-and-repeat cycle makes for a more powerful study, Dr. Hitchins said. If the new research on contemporary tumors turns up the same biomarkers that she’s already identified, then she and her team will fast-forward to the next stage of testing — comparing their blood-based test results with the colonoscopy results of the same patients. And if they’re not ...

“Then we’ll need to design the new assay,” she said.

Assay, by the way, is a scientific term for testing the biological properties of a sample.

“The assays that have been produced up to now were focused on non-Hispanic whites, and when you apply them to anyone other than non-Hispanic whites, they don’t work as well,” Dr. Hitchins said. “In our study, we’re really focusing on those minority groups who are being worse affected by colorectal cancer under the age of 50 years. So when it comes around to designing a test, we know it will work for those groups.”

Months or years from now, when Dr. Hitchins and her team have the final test assembled — what’s called a “validation series” — she’s looking for a simple outcome.

The ultimate goal of Dr. Hitchins’ research is to build the scientific case to support a new screening test. Translational research — the process of turning lab discoveries into a real-world application — can be complex, with scientists taking different approaches.

Most scientists will patent their biomarkers and sell them to companies, Dr. Hitchins said. Producing an actual test, however, requires independent testing under FDA-approved conditions, a company that can manufacture the test in great quantity, and hurdling a massive regulatory component.

“What we’re hoping to do is to develop an IVD test, a diagnostic test that other institutions can do in-house, in a diagnostic pathology lab,” Dr. Hitchins said. “We’re negotiating with a company to merge our biomarkers with theirs to produce something suitable for people under age 50 with a rapid turnaround time and cheap.”

In May, a new urgency appeared. The USPSTF’s updated screening guidelines made about 20 million additional people eligible for no-cost preventive screening through insurance.

“When you look at the original screening guidelines, 49% of cases are aged 45 and up,” Dr. Hitchins said. “So that only addresses half of the problem. Our hope is a blood-based screening test for a younger age, at let’s say 25. Anyone with a positive test result would need a follow-up colonoscopy.”

Photo courtesy of Can Too Foundation