Q&A with Genna Bain on her husband, cancer, and Chrono.gg 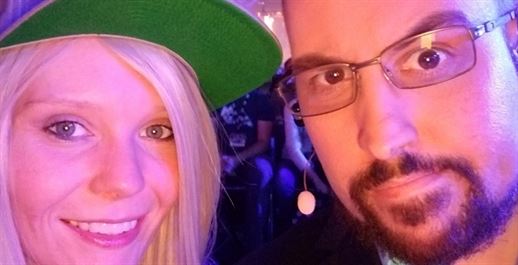 The Alliance and video game retailer Chrono.gg have partnered this week in memory of game commentator and critic John Peter Bain, who was commonly known as TotalBiscuit. Bain died from colorectal cancer in May at age 33.

Chrono.gg is donating its proceeds from Sept. 9 to Sept. 15 to the Alliance to support the organization’s work in colorectal cancer prevention, research and patient and family support.

Bain’s death represents an alarming trend in colorectal cancer, with rising incidence and mortality rates in adults younger than 50. Today, about 11 percent of colorectal cancer cases occur in this age group, with many patients initially receiving a misdiagnosis.

We talked with John’s wife, Genna Bain, about him, his cancer, and Chrono.gg.

Alliance: What do you hope Chrono can achieve with this week-long fundraising promotion?

Genna: Through this partnered fundraiser, I am hoping that Chrono can achieve promoting of a selection of wonderful games that my late husband, John Bain, truly enjoyed. Moreso, my hope is that the promotion in turn promotes awareness in communities that extend beyond our own. Being screened, advocating for early screening, and educating yourself on any increased risk you, or loved ones might have for colorectal cancers can save lives.

Will you tell us a little about your husband John?

John was a loving husband and father. He had a passion for good friends, good games, and good food—in that order.

Now tell us about TotalBiscuit, the way most people knew him.

Most people knew my husband as a games critic, commentator, and advocate for consumer rights within the games industry. He was extremely outspoken and opinionated, but always with what he believed to be the best of intentions.

How important was the gaming community to John?

The gaming community was, in many ways, John's second family. While he always made very clear the boundaries of his relationship with the community, he was ever conscious of their support, appreciation, and even approval when it came down to it. They were his reason for waking up and going in to work every morning, before and after his diagnosis.

Can you tell us about his battle with colorectal cancer?

The year was 2014, and John exhibited few of the symptoms, leading his physicians to believe he had irritable bowel syndrome. It would be more than three months from an “IBS” diagnosis to the removal of a potentially cancerous mass from John’s body. He followed up with radiation and chemotherapy as directed for many months and underwent several surgeries to obtain the clean bill of health issued to him in April of 2015, a year from when his original battle had started. However, in October of that same year, John was given a new diagnosis: stage IV colorectal cancer with metastasis to the liver.

While John was given the bleak prognosis and timeline, he channeled his energy into being an advocate for others with the disease. Reaching out to his millions of followers on various social media platforms, John implored that every one be vigilant as you are #NeverTooYoung to be affected by colon cancer.

What was John’s relationship with Chrono.gg?

Our relationship with Chrono has been a special one since the company's inception. We were among the first influencers to partner with Chrono. In our experience, it is not typical for a partner to extend an offer where we could pick and choose which games we wanted to promote. Chrono.gg releases a new deal for a different game every 24 hours on their website. Being very particular in what games we would recommend to our community, Chrono allowed us the freedom to organically promote the deals we felt were the most beneficial to followers of our social media platforms.