Paula Chambers Raney: Screening would have made all the difference 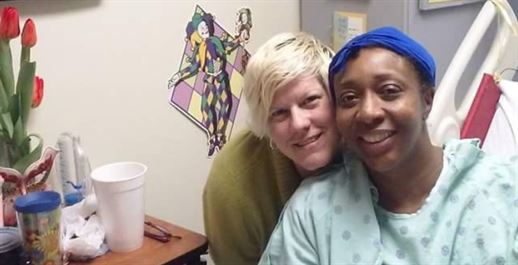 Houston ally Paula Chambers Raney married her wife, Lara, on the High Line in New York City in October 2014. But the wedding celebration was short-lived.

“After our wedding, we went to a play, and I was so sick I almost fell over the balcony—I thought it was the plague,” Paula said. “It was terrible.”

Paula had symptoms associated with colorectal cancer for years: irregular bowels, gas that hurt inside the body, and bloody stool, among others. They had come to a head shortly after the wedding, yet doctors were convinced the 42 year old couldn’t have colorectal cancer, due to her age.

In fact, the incidence of colorectal cancer is rising in adults younger than age 50. Researchers aren’t sure why.

“I did have a good primary care physician, but she just kept saying it can’t be cancer, everything else but cancer,” Paula said. “They didn’t take my symptoms seriously. I was on antibiotics and steroids for three years.”

One doctor even told her she had eaten something red, which, the doctor theorized, was why her stools were red.

“No, I didn’t eat something red, it was actually blood,” Paula said.

Due to her age and despite her symptoms, physicians repeatedly chose to not recommend Paula, who is African American, for a colorectal cancer screening. Colorectal cancer is more prevalent among African Americans, who also experience poorer medical outcomes. This is partly because screening rates are lower in this community, so the disease is often caught at more advanced stages.

Once, Paula did obtain a FIT screening test, which showed blood in her stool.

“But I was misdiagnosed,” Paula said. “They thought I had hemorrhoids. They said I was too young and cancer can’t be happening. But I had every single symptom.”

Amid her declining health, Paula lost her job because she frequently called in sick.

“And you know why I was calling in sick?” Paula asked. “Because I had cancer.”

Eventually, she was able to receive a colonoscopy at the county hospital, which revealed a “huge” tumor blocking the colonoscope’s path.

While Paula had, up to this time, very little luck in her treatment, her case was brought to a working group of oncologists from across the region, including doctors from MD Anderson Medical Center, a leading hospital for cancer treatment.

Paula’s medical team originally suggested chemotherapy and radiation to first shrink the tumor before attempting to remove it with surgery, but doctors from MD Anderson advocated for immediate surgery, Paula said. It was a recommendation that may have saved her life.

That was four years ago. Paula recently had a clean scan, indicating the disease has been kept at bay. One more year of positive results, and Paula will be declared cured.

But she keeps fighting and telling her story, with a powerful emphasis on what could have happened had she received an earlier screening prompted by her symptoms:

“If my doctor had said he knew that black people have a higher predisposition for getting this disease, so I’m going to fight for you to have this screening, maybe he could have then said, you have a tumor in your colon, and we’re going to take that out, and then maybe he could have said you’ll be stage I and not stage III,” Paula said.

“He could have said it would cost the city, county, and state less money. It would take less time off of your life. It wouldn’t have ruined your wedding. So many things won’t happen to you if I’d just ask for this test. So the screening would have made all the difference in the world.”