Maryhelen: A sister committed to a promise

There are a number of hereditary conditions that can increase the risk of colorectal cancer (CRC), but Lynch syndrome is the most common, with about 3 to 5 percent of CRC cases are caused by Lynch syndrome, according to the National Institutes of Health.

People with Lynch Syndrome inherit an increased risk of cancer and routine colonoscopies are recommended. Knowing your family health history is imperative to managing this condition because it’s passed from generation to generation.

Unfortunately, there aren’t usually any symptoms associated with Lynch syndrome, and too many people learn they have the condition after it’s too late. When Maryhelen’s brother, Anthony, was diagnosed in his early 30s, her family learned first-hand the importance of knowing your family health history.

“My brother was 36 when he passed away,” she said. “He didn’t have any of the typical symptoms—no abnormal bowel movements, no blood. He put off going to the doctor because he didn’t have insurance. In September of 2013 he was diagnosed with ulcerative colitis, given antibiotics, and told to watch his diet. That same year on Christmas Day, he passed out. Things got worse after that.”

After symptoms associated ulcerative colitis continued, Maryhelen’s brother was back in the emergency room. A colonoscopy was performed and a large tumor was found. He was immediately diagnosed with stage IV colorectal cancer. After complications from the surgery three days later, he woke up from his final surgery with an ostomy bag. Maryhelen and her brother were shocked and couldn’t understand how this happened. With a little bit of family health investigating, the story started to become clear.

“We asked our mom, Cleo, about our family history. She reached out and gathered information and it was determined that many family members had suffered from or died from colorectal cancer. We knew our uncle had died, but we could not believe how many other people had colorectal cancer in our family.”

Her brother’s physician recommended genetic testing, even suggesting, “There’s no way this many people in your family have had this and it’s not hereditary.” A test on his tumor sample was ordered and it was determined that he did in fact have Lynch Syndrome, specifically the MSH2 gene. Maryhelen, her mother Cleo, and her two nephews were tested. Maryhelen, Cleo, and her nephew, Cyrus, tested positive for Lynch Syndrome.

Maryhelen’s brother was in the hospital for 67 days before passing, and Maryhelen was with him 64 of those days. She made a promise to him to keep his children healthy and to make sure they were screened. She is committed to that promise.

“I immediately started looking for ways to get Cyrus tested without it costing us everything we had. He didn’t have insurance. We found the Colorectal Cancer Alliance and put him on a waiting list to be screened. He got the call this March, during National Colorectal Cancer Awareness Month. Convincing a 20-year-old boy to get a colonoscopy isn't the easiest thing I've ever done, but a promise is a promise and he had his first colonoscopy Monday, March 19. Thankfully he had no polyps, but he needs to go every year.”

Having a family hereditary condition isn’t easy, but knowledge of the condition is empowering. “Knowing that you have this gene and being able to stay on top of it is a gift. Early detection is what’s going to stop our family from being in my brother’s situation.” 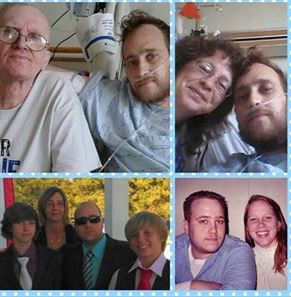 During March, the Colorectal Cancer Alliance is partnering with Olympus to schedule and screen fifty people across the nation, in an effort to save lives. Maryhelen received a call from the Alliance this month and the call was met with gratitude and excitement. “I’m so grateful we were given this chance.”

To speak with someone about Lynch syndrome, call our national hotline at 1-877-422-2030. You can also connect with an entire colorectal cancer community in our online Facebook group, Blue Hope Nation.

A very warm thank you to Olympus for this partnership.