Kennedy Hjelte: My dad’s cancer changed me, as well 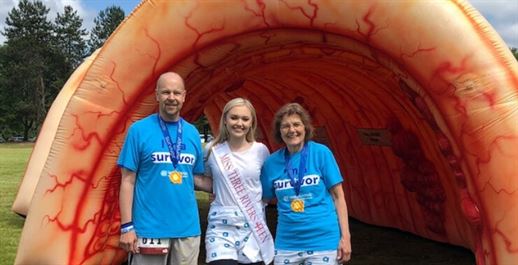 Kennedy Hjelte has competed in pageants for much of her life. One aspect of pageantry requires contestants to have a personal platform—a near-and-dear cause highlighted from the stage, through social media, and at public appearances.

Until two years ago, Kennedy had supported the welfare of dogs, but then her dad, Jeffrey, was diagnosed with stage III colon cancer at age 52. The diagnosis thrust the Hjelte family into the complicated and taxing whirlwind of cancer treatment.

“I feel like my dad is my best friend, so to see him hurt and in a lot of pain, it changed me as well,” Kennedy said. “In a way, I had to step up to a role I didn’t have before, and it made me mature a bit quicker.”

Now the reigning Miss Oregon Outstanding Teen has a new platform, colorectal cancer awareness, which she will speak about as the returning emcee of the Portland Undy RunWalk on June 15 at Willamette Park. She and her family are also raffling off a Louis Vuitton purse, with proceeds going to the Colorectal Cancer Alliance. Learn more about the raffle on the Miss Oregon’s Outstanding Teen’s Instagram. 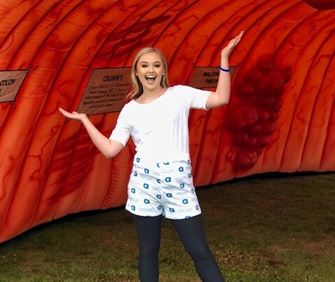 “There’s a quote I like that says cancer doesn’t have a face until it’s yours or someone you know, and that’s so true in this scenario,” Kennedy said. “So I want to educate families to get their screenings so they don’t have to go through the things we had to.”

Jeffrey’s diagnosis unveiled a family history of colorectal cancer among the Hjelte’s—Jeffrey’s grandfather had the disease, but knowledge of it was lost to time. About a quarter of colorectal cancer cases have evidence of a genetic or hereditary component, which puts immediate family members at increased risk.

At this year’s Undy, Kennedy want to bring more people out and support those who have or have had colorectal cancer.

And she wants to focus part of her message on young-onset colorectal cancer, as incidence rates in people under 50 years old are increasing.

“Before my dad was diagnosed, I didn’t know colorectal cancer was a thing, and I think a lot of people don’t think about it that much because they think it impacts only older people, so to be able to spread awareness is very important to me,” Kennedy said. “I want to advertise this so colorectal cancer becomes one of those really well known cancers.”

Click here to register for the Portland Undy RunWalk, or you can make a donation.