Getting to know the Alliance’s board of directors—Part two 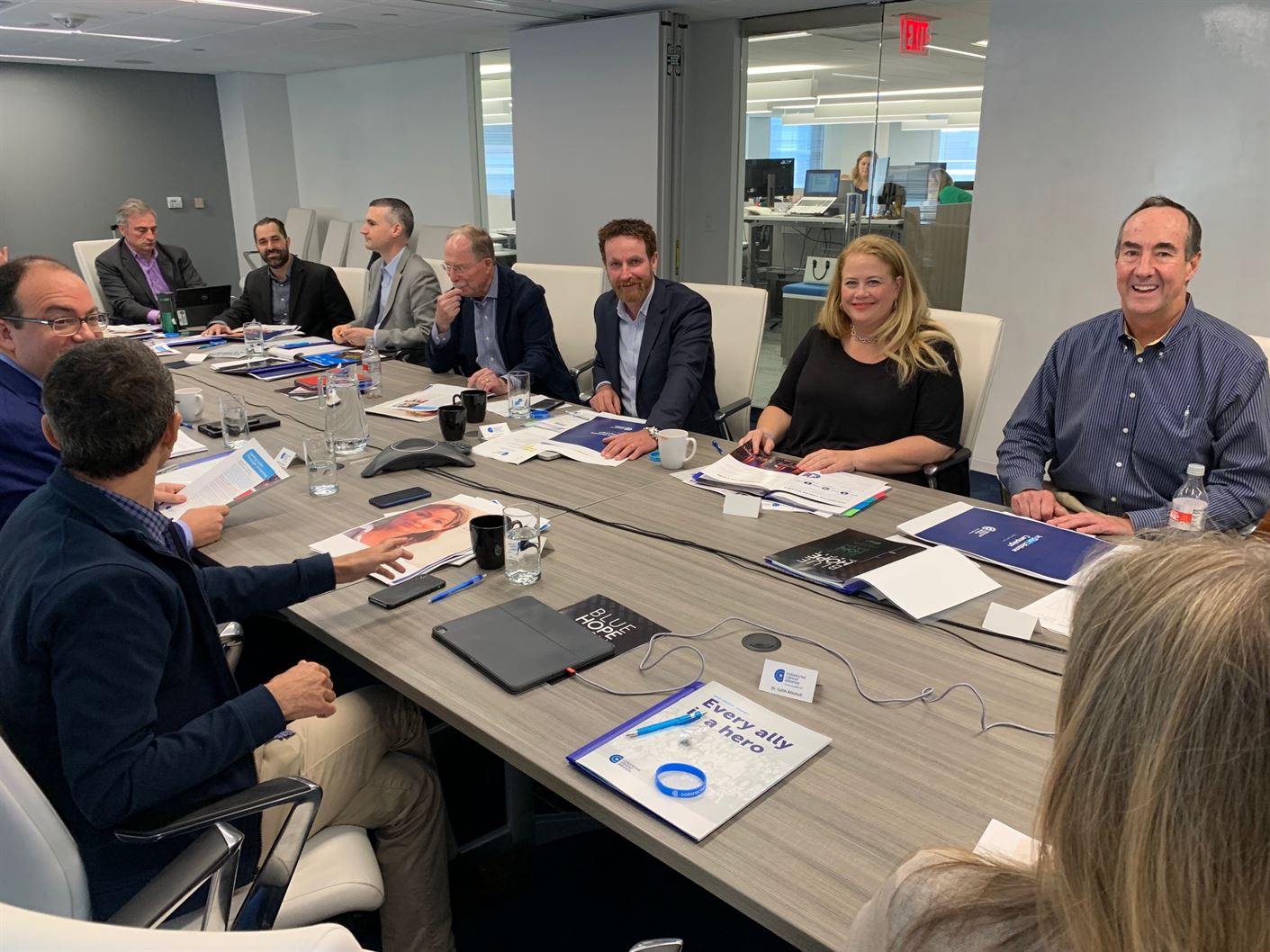 All nonprofits such as the Colorectal Cancer Alliance are legally obligated to have a board of directors. Often, board members are accomplished professionals from a mix of industries who advise on matters including law, finance, personnel, healthcare, and, of course, mission.

The Colorectal Cancer Alliance is fortunate to have the support of an outstanding board of directors, led by chairman John Backus. In part two of this series, we introduce several more members of the board and offer a glimpse into the essential work they do to support our mission to end colorectal cancer within our lifetime.

Avi Benaim is the founder and President of A.B.E. Networks. Avi started the company almost 30 years ago in Silver Spring, Maryland, installing car audio and video entertainment systems. As car manufacturers began to offer their own entertainment systems out of the factory and his customer base aged into home ownership, Avi pivoted A.B.E. Networks into residential and commercial technology integration. Avi is a Montgomery County, Maryland, native and a graduate of Bethesda-Chevy Chase High School and American University.

Avi first experienced a loved one succumbing to colon cancer after his father passed away when Avi was 10 years old. In his early 20s, Avi met the love of his life, Michelle Benaim, née Goldstein, at a philanthropy event she had organized. Avi and Michelle married in 1998 and have three children: Alex, Sam, and Sophia. In the early fall of 2015, Michelle was diagnosed with colon cancer. Both Avi and Michelle became immediately involved with the Colorectal Cancer Alliance, spreading awareness and raising money. Michelle fought incredibly hard even until her last days in October 2017. Avi aims to continue to display the Koach (Hebrew for strength) that Michelle was so well known for.

Michelle was a vivacious wife, mother, daughter, sister, and friend who celebrated life with laughter and warmth, especially with her three beloved children. After Michelle’s young-onset colorectal cancer journey ended with her death, her family established the Michelle Benaim Memorial Fund within the Colorectal Cancer Alliance to honor Michelle’s generous spirit and hands-on approach to making a difference in the lives of those most vulnerable to health disparities. Avi is also a key supporter of the Blue Hope Bash in Washington, DC. Avi joined the Alliance board of directors on June 22, 2018.

Clay Scheetz, on the left, serves as CIO of the Sterling Group, an Indiana-based real estate investment services firm. As a debt and private equity principal and advisor investing across all property types and capital structures, Clay has underwritten in excess of $25 billion of commercial real estate assets located throughout the United States.

Prior to joining Sterling in 2015, Clay spent nearly ten years overseeing Grandbridge Real Estate Capital’s Indianapolis regional office and held a variety of executive positions with Nomura Asset Capital, Olympus Real Estate Partners, and Starwood Capital Group. Clay graduated with honors from the University of Notre Dame and received an MBA degree with a concentration in finance from Columbia University.

Clay is actively involved in numerous civic and trade organizations and is a strong supporter of Riley Hospital for Children, as well as the Colorectal Cancer Alliance. He took an active role in planning an executing the Blue Hope Bash Indianapolis. In his free time, he enjoys spending time with his wife and three children, as well as water skiing and running. Clay joined the Alliance board of directors on October 20, 2017.

Julie Clowes, left, became involved in colon cancer advocacy efforts after losing her mother to the disease in 1998. That experience inspired her to “do something” in order to call attention to the disease. Opportunity came when she moved to Washington, DC, and helped to create the DC ScopeItOut 5K for colorectal cancer awareness.

Julie’s day job is with the Small Business Administration (SBA), where she helps people start and grow businesses. Through the years she has served as a public affairs specialist, agency attorney, and executive leader.

Prior to joining SBA she spent three years with the Michigan Small Business Development Center as an International Trade Specialist where she co-authored “Trade Secrets: The Export Answer Book.” Julie is a graduate of the Excellence in Government Fellowship program and has a BA in International Studies from Bradley University and an MBA and JD from Wayne State University. Julie joined the Chris4Life Colon Cancer Foundation board of directors in 2011, before the organization’s merger with the Colorectal Cancer Alliance.

Frank Sapienza was a founding director of the Chris4Life Colon Cancer Foundation, which merged with the Colorectal Cancer Alliance in 2016. He served as Chairman of the Board during 2014 and 2015 and was a member of the Medical Advisory Board for Chris4Life.

After a 30-year career with the U.S. Drug Enforcement Administration (DEA), he has been a founding partner in The Drug and Chemical Advisory Group, LLC, a consulting group specializing in drug development guidance for the pharmaceutical industry for products containing abusable substances. During his career at the DEA, Frank was the senior scientific advisor on technical and policy matters. He has served on expert panels with the U.S. Government, the World Health Organization, the International Narcotics Control Board and the United Nations Office of Drug Control Policy, as well as on scientific and medical advisory boards for the pharmaceutical industry.

Frank has lectured internationally and written and co-authored articles on drug regulation and abuse liability, prepared portions of national legislation and international treaties, and provided expert testimony in criminal, administrative, and legislative proceedings. Frank has a graduate degree in chemistry from the University of Pittsburgh. His wife of 37 years, Christine Antonelli Sapienza, passed away in 2009 after a three year bout with colon cancer. Frank is a founder of the Chris4Life Colon Cancer Foundation, which was established in 2010.